It's been quite a year for me. A few significant things that have occurred in my personal life are

The New Year will bring many challenges, and I thought to end the old year I'll look back at some things that have made me smile this year 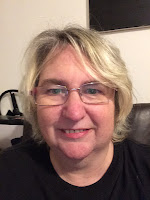 I decided to try my natural hair colour. This is step 1 - blond. Step 2 - grey was not as successful, and I can't wait to colour up just as soon as I can get both money and opportunity in the same place at the same time.

My favourite books got a face lift. Okay, Enigma I and II had been re designed previously but Enigma III came out this year and I think all the covers have been beautifully rendered by the amazing Red Haircrow, who also publishes the books, along with The Runaway.

Enigma is the story of an incredible young man, Silver, who is released from sex slavery after 7 years into a world he doesn't understand and doesn't belong in.

Book I follows Silver as he emerges from a self induced robotic state to face the world, and threats from his past, along with his devoted former carer and soulmate, River.

In Book II River is left to care for his twelve-year-old brother when his parents are killed in a car accident. When spiteful family intervene, Silver's history and current mental health issues become a significant problem for the couple due to Social Service's negative attitude. Faced with the threat of foster care for Ben or separation for Silver and River, River makes difficult choices that ultiamately drive Silver away into the arms of a whole new circle of friends that could bring about his making or breaking.

In this book we meet Ariel who is definitely one of my favourite characters to write. He's unashamedly sexual and has no self consciousness about being an exotic dancer or a whore. In fact, the entire merry band of whores, in the Theatre de la Vie are gloriously proud of their dancing (and other) skills. From Alex, the hulking, but graceful and gentle giant, to Suki the martial artist, to Asher whose background is similar to Silver's and who can help him understand and come to terms with his past

In Book III Ben starts to grow up and causes the cracks which marred Silver and River's relationship in Book II to widen, but Ariel, the amazing friend that he is, teaches Silver to fight, whilst conducting his own battle against his very nature to allow him to find his own happy ending.

Hopefully, Book IV will be out sometime this year, introducing the cute and cuddly Kitten and bringing Silver once more face to face with his former Master.

Although Enigma are, and always have been, my favourite series (I am unashamedly in love with Silver and had the best time of my life seeing the world through his eyes when I wrote him) The Runaway deserves an honourable mention. Also published by Red Haircrow it's cover illustration is by a dear friend and incredible artist, Maria.

In this book, Jack is staying at a lake cabin with his aunt after losing his memory in the accident that took the lives of both parents. Here, he meets Ciarrai, a gender-bending livewire who sweeps him off his feet, then disappears.

For the first time, this year, I started to listen to audio books. By far my favourites have been the Tales of Verania series by T J Klune. These are also available in paperback and ebook from Amazon. 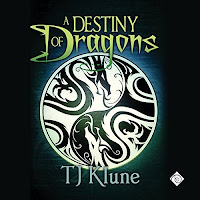 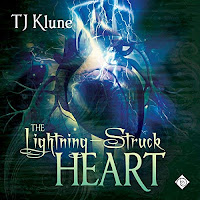 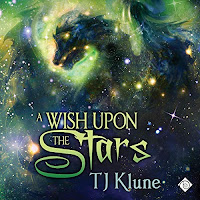 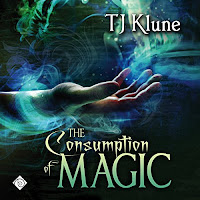 Thanks to audible, I also re connected with one of my favourite series.

My favourite new books of the year were (Please note that Love Spell now has a different cover, but this was my favourite one so I put it in)

I haven't been as committed to Wednesday Briefs as I should have been in 2018, especially the latter half, but I want to improve in 2019, first because I want to finish the story and second because I've lost my mojo for writing, as I've become mired in all that surrounds the writing part of being an author and my creativity was strangled. I have come to realise that this is partly because of my ASD and I have to accept that I will never be able to keep up with all the social media/blogs/websites etc and my burning desire to do it all has to be let go of. I will focus on three things (apart from facebook and twitter) being this blog, my website and the newsletter. Hopefully that will help me focus and become more effective.

I shall finish with some of my favourite character art. All of the pictures are either by Maria or myself (the good ones are Maria's)

These are Silver (okay, I'm indulging myself but I've already admitted that I'm in love. Somewhere, in some alternative universe, he's mine) 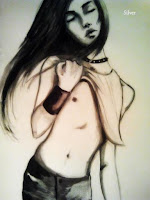 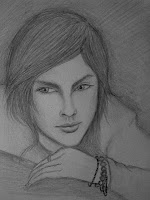 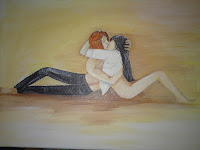 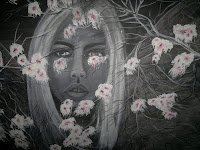 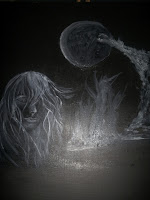 This one is also mine, of Rowan from Hostage 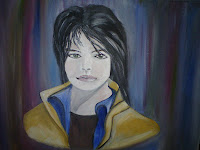 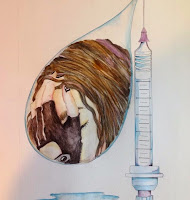 My plans for next year

I have two books in production with eXtasy

I've also been offered contracts on a 3 (possibly 4 )book Fantasy series, and I'm in discussion for another standalone m/f fantasy.

I'm intending to resubmit The Face in the Window, and Memories of Forgotten Love. I'm considering NineStar for the submission. I can't deny that I'm concerned about future submissions with eXtasy becasue they now expect their authors to properly format their submissions according to their house style. I now recognise it's my ASD that prevents me from grasping things like formatting, due to my difficulty in processing information and detail. I have given myself permission to not try so hard at things I know I can't do.

I have a photograph sitting on my desktop depicting a character who is demanding a story. I have elements of the story in my mind, but it requires some research and quite a bit of work. I'm not going to start until. Aria's story is completed and that won't be for a few months yet, if I continue to be able to write.

My 8-book "Haunted Hotel" series is still in the pipeline but it's testament to my reasons for pantsing. It's the fist series I've plotted out from the start and I've completely run out of steam. After three books it's become very difficult to conitnue to describe the same features in the same hotel without being completely bored. I'm trying to focus on the differences but you just can't have a character walking into a new place and not noticing things. Eh. I'll work it out eventually. Most of the stories are strong enough to call me back in the end.

Apart from that, there are lots of little pieces going around in my head, most of them ideas for things to do on my blog and website. As I'm keeping my website mainly for my own books and reviews, I thought maybe I'd do something with my backlist, revisiting my other books, maybe with character inspirations and background details, character interviews etc. Is that the sort of thing you'd be interested in? Do you have any other suggestions? Feel free to post or PM me, even if it's only to point out exactly what's wrong with my writing. It would be much appreciated.

I'll leave you with a unicorn, for three reasons. First, my daughter is obsessed with unicorns and I have been surrounded with them over Christmas. I now see unicorns everywhere, even in Asda (UK equivalent to Walmart). I mean, how cute is that tea pot and they have a unicorn glitter dispenser! 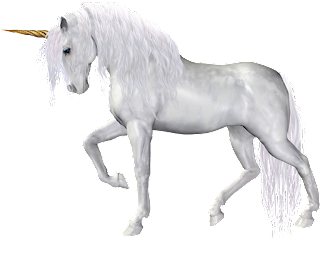 Posted by Nephy's World at 18:56 No comments: Links to this post

Check out my Newsletter for the latest news, views and giveaways. This month we have some exciting news about audiobooks and some progress updates.

A Miracle at Christmas
Posted by Nephy's World at 15:32 No comments: Links to this post