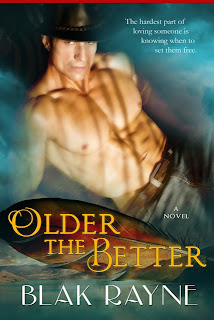 Today I'm fortunate to play host to the fabulous author Blak Rayne to talk about her book 'Older the Better' (a sentiment I agree with more and more as I approach the half century mark). She ponders the question - how far is too far, now there's a question.

How Far is Too Far?

Thank you for having me at your blog, Nephylim! It is awesome to be here! :)

So, from a reader's perspective, which is your preference...lots of sex, less sex, or a combination of both?

Now, if you said, "Blak, I love sex and it doesn't matter how much there is!" I've got to ask.... If sex isn't an issue for you, can you handle the vulgar language? What about graphic description? Do you find either of these offensive?

Personally, love isn't love when a character is raped, and it isn't particularly romantic either. I can handle some language, but if every second word is F*** this and F*** that, I tend to cringe. I think the obscenity can take away from the story. Let's put it this way, I'm not big on mobster movies, and the reason being the usage of foul language can get pretty heavy. The same applies to graphic description, some I can accept, but other things, not necessary. I've got a great imagination, so please don't spell out every gory detail for me.
How do you feel?

’The hardest part of loving someone is knowing when to set them free.’

Indiscriminate sex with strangers is the only pleasure Charles has left in life. No matter how much he wants a relationship, the memories of a painful break-up during his youth won’t allow him to commit—until a friend persuades him to confront the past—to confront the man who dumped him.

Taking his friend’s advice, Charles returns home, in the hopes of rekindling the romance with the man he lost. But, his father’s religious views and the backwater community he grew up in aren’t so understanding when it comes to same-sex relationships and, to his disillusionment, neither is the man he’s returned for.