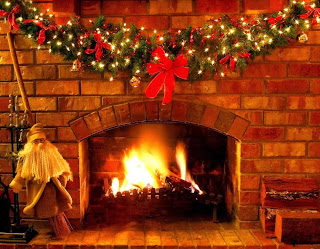 Another Wednesday rolls around, and a darned exciting one at that. MERRY CHRISTMAS

Hopefully I will have managed to pre post and by now I'll be well fed and tipsy :) Happy Happy Holidays to all

Today I chose There was a fire in his eyes, and the picture of the fire, just because it's cold as heck here.


“Ash,” Emma said, tentatively. He’d stopped screaming, but was rocking back and forth, his head in his hands. “Please, Ash. It’s me Emma. Look at me.”

Taking Ash’s hands, she pulled them away from his face. He resisted, but eventually she managed to force him to look at her. Emma almost recoiled. His eyes were still white and frozen.

“Emma, please,” Tristan said, desperately. “We have to go. They’ll attack any moment. They can’t hurt me and they won’t hurt Ash, but they’ll tear you to pieces.”

Holding tight to the frozen hands, Emma stared into her brother’s eyes. “Remember me, Ash. Remember what we are. We were one the same being, the same egg inside our mother. Part of you is me, and part of me is you. I can’t lose you. I won’t. It would be losing part of myself. I’m here, Ash. Feel me.” Emma put her hand over Ash’s heart, and he jerked, as if a bolt of electricity had passed through him.

For the first time there seemed to be something behind the frozen eyes. Ash blinked and moaned.

Ash moaned again and began to shake violently. He gave a piercing cry and yanked his hands free of Emma’s to cover his eyes.

“Ash? We have to get out of here. We’re in terrible danger.”

Ash lowered his hands and Emma almost fainted with relief. His eyes were blue again.

Emma stood up, and tried to haul Ash to his feet. He seemed to have no strength. Tristan crouched beside him and put a hand on his shoulder. Ash jerked again, and looked up at Tristan, his eyes glazed and confused. Without a word, Tristan slipped his arm under Ash’s and hauled him to his feet. Ash swayed, but was able to stand and, with Tristan’s support, walk.

“Stay between us,” Tristan said, as they stumbled toward the door. The creatures hissed and spat at them,
but didn’t come closer. In fact, they fell back, letting them pass.

“Why are they not attacking?”

“They dare not. If they harm Ash, Catherine will punish them, and you can imagine what kind of punishment it would be.”

“She wants him for herself. If she takes his life she gains power from him.”

“What kind of power?”

“The power to transcend death. Even though she will have wiped out the Loughbridge line, and satisfied the curse, she has no intention of eternal rest. Once she absorbs Ash’s life force, she will have the power she needs to break free of the cycle of life and death, once and for all. She will have terrible power and will not hesitate to unleash it on anyone who stands in her way.”

“Who knows? Catherine is insane. Who knows what she’s capable of or what she might seek to achieve with that kind of power. I would rather not find out.”

By this time, they had stumbled down the steps and ran, almost dragging Ash with them, back to the house.
Adam was pacing restlessly in the hall.

“Oh my god, what happened?”

“It’s a long story,” Emma said. “We have to get Ash somewhere warm.”

“This is getting ridiculous. We’ve got out of here. It’s not safe.”

“Nowhere will be safe.”

“I’d feel a lot better if we were back in civilization. Get Ash in the car.”

“Are you sure this is a good idea?”

“There’s nowhere in this house we’re going to get warm. We’ll drive to the closest hotel, and come back in the morning for our things.”

They loaded Ash into the car, and Adam skidded gravel in his eagerness to get the hell out of there.

“It will make no difference,” Tristan said. “You cannot run from her. She will follow wherever you go.”

“That’s as may be,” Adam said, but I’ll feel better being back on familiar territory. That house gave me the creeps from the start.”

Emma, sitting in the back with Ash wished the car would heat faster. She was trying not to think of the fact that, no matter how warm the car became, Ash wouldn’t warm with it. She put her arm around her brother, shivering at his touch, and drew him close. He rested his head on her shoulder.
Ash rolled his head, to look up at her. “What’s happening to me?” he whispered, through blue lips.

“You cannot make promised like that, Emma,” Tristan said, turning in his seat. A fire burned in his eyes. “It is not true. It is unlikely Ash will survive.”

“I know that, Em,” he said. “I feel…cold inside. Sometimes things are clear, but mostly it’s like a dream, and I’m sliding into it, more and more. I’m slipping away, and I can’t stop it.”

“There’s nothing you can do, Em. She’s too strong.”

“I won’t accept that, Ash. She may be strong, but I’m stronger, and I won’t let her take you away from me.”
Ash stared up at her, his eyes very blue.

“Jesus Christ,” Adam cried before the car swerved  violently to the side, skidded and there was a moment of sublime peacefulness, when everything hung suspended.

“Ash,” Emma cried, trying to shield her brother with her body, then there was a tremendous crash, and everything went black.

Now, go check out the other flashers here Hopefully, the new site will mean I no longer have to list every flasher individually. We'll see how it goes. Please leave a comment to let me know if it doesn't work
Posted by Nephy's World at 17:00