It's been another fast week of mixed emotions. Nothing major happened, just a lot of ups and downs. It was pleasantly distracting to write about Robin and Cyan, especially when he surrounded himself with these 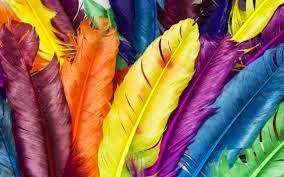 “Cyan, please,” he called. “You don’t understand. You didn’t hear it all. That’s not what I said. I swear I wouldn’t say something like that about you.”

Cyan either didn’t, or didn’t want to hear. He kept on running until he suddenly stopped and hammered on a door.

“Shit,” Robin hissed, and skidded to a halt.

The door to the headmaster’s office was wrenched open. “What the…?”

“It’s happening,” Cyan said, in a strange voice, and stumbled into the room as the headmaster stood aside. Moments later the door closed leaving Robin alone in the corridor.

What was going on? ‘It’s happening?’ What did that mean? What was happening? Had Cyan expected Robin to let him down somehow? Was it because he’d just been waiting for someone to call him a retard? But that couldn’t be right because people had been shouting that word all day.

Robin sat in a chair and pondered. What was going on in there? Many times, he decided to leave, but somehow, he couldn’t. Something was going on and it wasn’t good. Whatever it was, he couldn’t leave Cyan alone.

The sound of hurrying footsteps snapped him out of his pointless musings, and he glanced up to see a woman almost running down the corridor. She was carrying a large bag, from which brightly coloured feathers dropped to leave a trail behind her.

Robin hurried to gather up the scattered feathers, which had now been joined by a few rainbow coloured scraps of material. He handed them to the woman, and as soon as he caught her eyes he knew who she was. Cyan’s mother.

“Oh hello,” she said a bit absently. “Robin isn’t it? Do you know what happened?”

“No. At least…. It’s been a bit rough. Some bullies got hold of him and when I found out I went to sort it with them. No fighting,” he added quickly when her eyes widened. “I…um...persuaded them it wouldn’t be a good idea to say bad things about Cyan. He overheard the last part of the conversation, and must have thought I was saying the things I was telling them not to say. He ran away and I couldn’t’ catch him. Next thing I know he was in there. I’ve been…. I couldn’t just go.”

The woman smiled, and put a hand on his shoulder. “You’re a good friend, Robin. I’m glad Cyan met you.”
Turning away, she knocked on the door which was opened almost immediately. “Could you wait here for a little while?” she asked, as the headmaster ushered her in, giving Robin a hard look.

Acutely aware of the glare the headmaster had given him before he closed the door, Robin squirmed in his seat. What the hell was going on?

Robin jumped when the door opened. The headmaster didn’t look too pleased. “Could you come in Robin, please?”

Nervously, Robin got to his feet and shuffled into the room.

The headmaster’s office wasn’t the most comfortable room in the school, especially to those pupils who had been summoned there. Even when he knew he’d done nothing, Robin always felt slightly guilty when he entered this room, and this time he wasn’t sure whether he was in trouble or not.

Cyan was sitting on the rather basic corner unit where the headmaster would have ‘chats’ with people who weren’t in trouble. Those who were had to sit in hard backed chairs on the opposite side of the desk to his lazer-eyed glare.

Even though he was in the comfy seats, so to speak, Cyan didn’t look comfortable. He had his knees drawn up and his head lowered. The first thing that entered Robin’s head was ‘he’s going to get into trouble for having his feet up on the chair’ and the second thing was ‘what the hell are all those feathers for’?
All around where Cyan sat, as well as woven into his hair, were the bright, colourful feathers Robin had helped rescue, as well as little squares of fabric. Cyan seemed to have fistfuls of feathers and cloths draped over his knees. What the hell was going on? Cyan’s mother was sitting next to him, rubbing his back and singing softly. Singing? In the headmaster’s office?

Robin exchanged a glance with the headmaster who shrugged helplessly, showing one of his rare moments of humanity.

Hesitantly, Robin took a seat next to Cyan. Why hadn’t Cyan even looked up?

“Hey,” Robin said, bumping shoulders with Cyan. Cyan moaned and clutched the feathers tighter. “What’s up? You know I didn’t mean it, don’t you? You know I’d never have said that about you? I was telling them what not to say. I told them I’d…” he glanced at the headmaster. “…that I’d make life hard for them if they said anything mean about you again. I’d never hurt you.”

For a long moment, Cyan didn’t move, then he slowly lifted his head to look at Robin. It was hard to see through his hair, especially with the feathers woven in. Cyan raised his hand. “Feathers,” he said.

Cyan nodded and took a deep, shuddering sigh, rubbing his cheek against a square of crimson velvet. “I think I need to go home now,” he said.

“Don’t you have another class?”

“Why not? You’re not scared, are you? No one will hurt you now. Everyone in the school knows the score. It will be easier from now on. I promise.”

Cyan gazed at him. His eyes were very bright. “I believe you,” he said. “I do trust you, but I still have to go home.”

“Because my Mam gave me my medicine and if I don’t go home I’ll just go to sleep in the middle of the classroom. People tend to get pissed when I do that.”