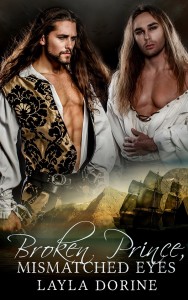 All of his life, Caden DeMott’s mismatched eyes have made him the target of superstition and scorn. Though he is the son of a nobleman, he’s been allowed to run free over the hills and moors, mostly ignored by his family. No one ever thought to inform him that he had been betrothed since infancy, until the day his fiancé, Prince Rhys Gwyther arrived to marry him.

Rhys is the prince of the small island country of Mauritania, a land rich in gems, rose oil, and pearls, but poor in skilled artisans and seeds to grow crops. In order to further cement the trade route to the mainland, he’s been sent to marry a man he’s never met, and bring him back to Mauritania.

Unfortunately, an accident years before has left Rhys with a lot of emotional baggage and very little trust in strangers.

But trust is exactly what Caden and Rhys are going to need if they are to make a life together, and help unravel the mystery of who’s been smuggling valuable gems and pearls off the island. Add in the realization that Caden’s stepmother, Mildred and her island representative, Maxwell, have been importing inferior goods for years, forcing Mauritania to become more dependent on them, and trust becomes even more difficult.

Caden possesses the knowledge to finally allow Rhys’ father to unravel the plot to ruin Mauritania, but only if the king and his son are willing to put their faith in Caden’s loyalty to his new home. Something that is difficult to do after Caden is accused of cheating on his marriage vows to Rhys with his guard, Luc. Will Rhys believe him innocent? Or will their marriage be over before it truly has a chance to begin?

Caden’s jaw dropped as he crossed the chamber to stand in front of his husband. “He’s the one who grabbed my wrist and yanked me against him. I was on my way out of the chamber before he did that. Luc was right there, he can tell you,” Caden said indignantly. “And I am growing tired of you accusing me of things.”

Rhys’ eyes widened, and Caden wondered if he hadn’t noticed Luc in the chamber.

“Maxwell was waiting in the study when Luc and I returned from our ride,” Caden explained further.
“He said Mildred wanted him to watch out for me, and he offered to show me around and explain the differences in the customs of Mauritania to the ones back home. Like I have a clue how society is expected to behave at home because I was never really invited to be a part of it unless Mildred had a need to show me off.” He sighed. “Regardless, I told him no, that you were keeping an eye on me and would show me around and teach me everything I needed to know. Luc grabbed his wrist and gave him a stern warning about laying hands on me and escorted him out of the manor.”

Rhys scrubbed a hand over his rapidly reddening face.

Caden, however, slowly began to smile as something dawned on him. He wasn’t sure he was right, but he fully intended to use the opportunity to ask. “Were you jealous?”

“You’re damn right I was,” Rhys snapped, his head jerking up to meet Caden’s eyes. “You’re my husband, and no one else has the right to touch you.”

Caden looked deep into Rhys’ eyes. He could see the anger there, but beneath it, he realized for the
first time that he could see the hurt, too. He took a step forward, putting himself in touching range.

“But you can touch me,” he said, his voice low as he reached out a hand to trace down Rhys’ arm.

I was so excited to be able to evesdrop on a chat between Layla and her boys, so I can't wait to share them with you

Layla: Hello guys, are you ready for this?

Rhys: I suppose we have little choice in the matter.

Caden: I’m ready. What do we have to hide?

They share a quick glance between them before Caden slides an arm around his husband and pulls him close.

Caden’s smile is bright, illuminating his mismatched eyes, bringing out the green in the brightest one, and even Rhys can’t keep from smiling then, and relaxing just a little.

Layla: So here’s an easy one for you guys to start out. What was your first thought when you were told you were about to be married?

Rhys: I think that ones more a question for Caden. I grew up knowing that I would marry Mildred and Maxwell’s first born.

Layla: Did it matter to you any when you found out they’d had a son?”

Shaking his head, Rhys stroked his fingertips down Caden’s arm, making him shiver a little.

Rhys: On Mauritania, it’s as common to see two women or two males married as it is to see a mixed couple. The only reservations I ever had about marrying Caden was the fear that he’d take one look at my limp and see that I could no longer keep up, physically, and think I was not a worthy husband for him. Before the accident, I was excited for the day to come when the wedding would take place.

Layla: In light of the way some of your own people treated you afterwards, I can understand your apprehension.

Caden: As could I, once he was finally honest with me.

Layla: And you Caden, how did you feel when you heard that you were not getting a choice in who you married and that the person was already on their way to marry you.

Caden: Uncertain. I didn’t know what to feel, or what to think. I trusted my father, and I’d always obeyed him, so there was never a question of not marrying Rhys. I just hoped that my hounds would be allowed to come with me, and that he wouldn’t see my eyes and hate me for them.

Layla: So before you laid eyes on Rhys, how much had you been told about him?

Caden: Only what my father told me that day. That he was the prince of Mauritania and that I was to marry him. I don’t think my father bothered to learn anything about him and if Mildred did, she never bothered to pass anything along. I grew up ignorant of his existence, and the contract.

Layla: That had to be difficult. What was your first impression of Rhys when you met him?

Caden: That he looked handsome…and angry.

Rhys: Unfortunately, I misplaced all of that anger by dumping it on you.

Caden: But we got past it, and learned a lot about one another in the process.

Layla: Were you relieved to go to Mauritania and get away from Mildred?

Caden: Very much so. The one thing I held on to on the entire journey was that it couldn’t be worse than living with her. That nothing that was said to me there about my eyes or my wild ways would be worse than the things she’s already said. Meeting Anwen and Kendrick and being so welcomed by then was a gift I’ll always cherish.

Layla: And what was your first impression of Mauritania?

Caden: That is was beautiful, and even wilder than my father’s lands. My first thought upon seeing the cliffs was that I couldn’t wait to take Brutus and Titus out to explore them.

Layla: And have you gotten that opportunity yet?

Caden: Not fully. I’ve been in them to hunt the mountain cats, but that’s all we’ve had time for so far.

Rhys: Soon, we’ll make time and go; when the weather is better. The mountains are snow covered right now, not the best for exploring and sleeping out of doors in.

Layla: So Rhys, what has been your favorite moment with Caden so far? I know a lot has happened since his arrival and you’ve both been working hard, but there have been moments, haven’t there, when you’ve been able to get away.

Rhys: When Caden returned from helping my father escort Maxwell back to the mainland, we were able to get away to the hunting cabin in the north. Being able to spend the afternoons in the hot springs or trapping together and cooking our catch over the fire pits outside was a wonderful treat after everything we’d been through.

Caden: One night, we sat outside until almost dawn and watched the lights in the sky change colors from red to green, and even violet. There were streaks of light slashing through the heavens; it was one of the most wondrous things I’d ever seen.

Layla: I bet that was pretty fantastic. I don’t want to keep you guys much longer, I’m sure you have many more memories you’re just anxious to make, but before you go, I have to ask: what is the most surprising thing you’ve learned about one another so far?

Rhys: Caden is both kind and patient with children. I noticed him one day with one of the little girls who helps out in the kitchen. She’d been sent to the hen house to get eggs and he’d found her crying because the hens had pecked her and she’d broken the only two eggs she’d managed to gather. He took her back in the house and showed her how to sooth them so she could gather the eggs unscathed. I’ve seen him with other young people too, explaining different techniques and even teaching one youth how to ride.

Caden: Had so many others not done the same for me, I would know very little. It’s easy to take the time to pass some of that knowledge along. The thing that surprised me the most to learn about Rhys was that he is as talented a storyteller and bard as Anwen. There were many nights up at the hunting lodge that he entertained us all with tales and songs. He has the most soothing voice.

Layla: Now that is something I hope he will share in upcoming books. Thank you both for co-operating today, I’m sure our wonderful readers appreciate it too, and look forward to seeing more of you both in the second part of the Mauritanian Saga.

Rhys: We wouldn’t be opposed to returning.