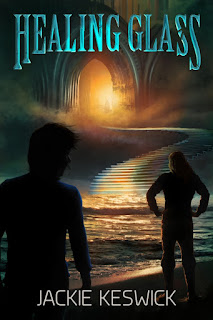 An ancient, forgotten accord.

And two gifted men caught in a web of greed and dark magic.

Despite belonging to different guilds, glass master Minel and warrior captain Falcon are friends. Their duties keep them apart, but when Minel falls ill and chooses death rather than the only known
cure, nothing can keep Falcon from his side.

As their friendship grows into more, old wrongs and one man’s machinations threaten the floating city and leave both Minel and Falcon fighting for their lives. Can they learn to combine their gifts to save the city and its magic, or will everything they know and love perish before their eyes?

Healing Glass is an LGBT fantasy adventure with its head in the clouds. If you like medieval backdrops, impressive world-building, three-dimensional characters and a touch of magic, then you'll love Jackie Keswick's socially-conscious adventure. 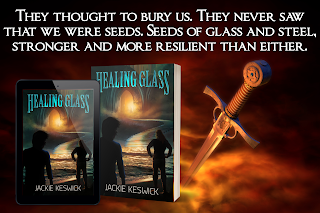 Thank you for hosting me on your blog, Cheryl. I’m delighted to be here to talk about my new release, Healing Glass. It’s a fantasy novel about a glassmaker, a warrior and a city in the clouds… and since I’ve not written fantasy in a while, getting the story ready for release caused me some sleepless nights.

As writers, most of us worry whether the stories we’re creating are good enough. That’s a theme that runs through Healing Glass, too. It’s a world where some people have special gifts, and gifted children start their apprenticeships when they’re ten years old. They become journeymen at sixteen and they learn and practice for years after that on the road to become craft masters.

One part of becoming an artist is about learning the craft. The other part is talent, inspiration and confidence. And in Healing Glass, one of the characters has been a glassmaker’s apprentice for years. He knows his craft, but he’s convinced himself he has not enough talent to ever become a master, and he doesn’t listen when his master or even his friends and family tell him otherwise.

That lack of confidence isn’t just holding him back when he makes glass. It actually leads him onto a path that threatens the floating city and the three Gifted Guilds, and forces Minel, the glassmaker, and Falcon, the warrior captain, to risk everything they have and are to stay alive and save their world. It won’t be an easy journey, and they’ll have their own moments when they feel they’re not good enough - very much like the rest of us.

And like most of us, they’ll help and support each other. After all, that’s what friends are for.

The tiny plate of glass could change the workroom’s atmosphere in the time it took Wark to draw breath. It hung on a thin chain just off the largest window. Intricate and delicate like fine lace, it glowed in all the colours of the rainbow and hummed with power. The ornament had been in his workroom for ten years, a gift from Minel on the day Wark had become a councillor.

Wark had touched the small item and all joy over his achievement had drained from the day. Because Minel, barely a third into his apprenticeship, had crafted something so wonderful it had left Wark speechless. The glass was exquisite, carefully made and coloured, and the wash of delight Wark felt when he touched it spoke of more than craftsmanship. Minel had every right to be proud of his work, but instead he’d apologised for the simple design of his gift.

Wark had wanted to shove his fist down the boy’s throat. He’d trained for more years than Minel had been alive. He’d worked and studied, and he’d never produced anything even close to the beauty and power of that small ornament Minel had gifted him.

If he needed a reminder that he would never be what he’d so desperately desired, he just needed to look at Minel. That awkward, skinny boy with his coltish legs and too-large eyes would grow into a glass master who created pieces that left people speechless. It was all Wark had ever wanted to do. And he was just not good enough.

Jackie Keswick was born behind the Iron Curtain with itchy feet, a bent for rocks and a recurring dream of stepping off a bus in the middle of nowhere to go home. She's worked in a hospital and as the only girl with 52 men on an oil rig, spent a winter in Moscow and a summer in Iceland and finally settled in the country of her dreams with her dream team: a husband, a cat, a tandem, a hammer and a laptop.

Jackie loves unexpected reunions and second chances, and men who don't follow the rules when those rules are stupid. She blogs about English history and food, has a thing for green eyes, and is a great believer in making up soundtracks for everything, including her characters and the cat.
And she still hasn't found the place where the bus stops.

For questions and comments, not restricted to green eyes, bus stops, or recipes for traditional English food, join her in Jackie’s Kitchen on Facebook or find her in all the usual places: