Some Of My Favoutire Books - m/m

I have so many favourites that I didn't know how to approach this one. In the end, I decided to choose books whose characters have stayed with me over time. There won't, therefore, be many, if any, new releases. This also allows for the fact that I have an appalling memory and if I didn't choose books that have endured in my mind. I still won't get to all of them because I'll remember more later, then more tomorrow etc. If I overthink this I will never start so just let's get on. I am sorry to have left so wonderful books out but I would be here forever, and no one would get to the end of the post. 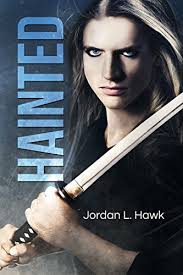 A retired ghost hunter. A man seeking redemption. Can they stop an ancient evil from destroying the world?

Dan Miller once hunted the zombie-like revenants known as haints. He protected the living and quieted the dead. After his parents’ death, Dan gave up his own dreams to raise his young siblings. But when a necromancer’s dark magic leads to murder, Dan must once again take on the mantle of protector and put his life on the line

Leif Helsvin needs Dan’s help to hunt down the necromancer. But the desire to solve the murder and find justice isn’t the only emotion at play between Leif and Dan. As the two men grow closer, the passion between them threatens to ignite into a fire neither of them can control. Will Dan give into his desire for Leif, or will the necromancer’s evil destroy their love before it can even begin?

Hainted is an m/m paranormal romance novel. If you like suspense, romance, and a bit of magic, you’ll love Jordan L. Hawk’s supernatural adventure.

Buy today to experience this haunting story of romance and redemption!

On almost the same footing are Jordan's fantasy series


ALEX, (AS WELL AS THE OTHER TWO IN THE TRILOGY - THE SHED, THR BASEMENT)

Alex is twenty and confused. He always is. Severely abused as a child, he's left with scars on his body and even worse scars within his mind. But from this pain he receives his gift of empathy, his ability to see and react to the strong emotions of others. When a serial killer moves into the area and begins to threaten those around him, Alex is compelled by his visions to rescue them. When he can, he helps the police, yet some detectives suspect he's the cause of the problem, not the solution.

As Alex comes closer to uncovering the killer's identity, his visions turn to nightmares. He hears the cries of the children, the screams of the tortured. Will the support and love of his friends be enough to get Alex through this summer of terror, or will he lose himself in his dreams and become yet another victim to the killer's gruesome games?

THE HIDDEN GEM SERIES AND THE HAVEN INVESTIGATIONS SERIES

I truly can't choose between these two series which couldn't be more different.

Hidden Gem is pure fantasy while Haven Investigations is entirely contemporary. They have many things in common though - fragile, broken men who are stronger than they look, mystery surrounding the character's origins, strong partner, cross dressing, mystery and mayhem

I read the Hidden Gem series first so I'll put it first here. 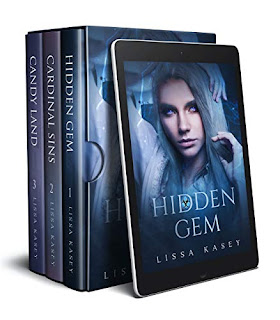 Hidden Gem: The sparkling jewel of the Hidden Gem, City M’s most renowned brothel, Misaki “Aki” Ito is living the good life. He’s not subjected to torture for his psi abilities, he has a roof over his head, food to eat, and all the sparkly shoes he could dream about. He also has one particular regular he can’t get enough of, Shane McNaughton, even if Shane occasionally asks for Aki’s help on a case.

Shane is a cop specializing in missing persons. He’s good at finding people, not just because of his years as a seasoned detective, but because he survived the Third World War and resulting plague with a few supernatural abilities himself. Mutated by the virus that wiped out two-thirds of the world’s population, Shane no longer considers himself human. Which is why he limits his visits to a very breakable psi companion when not working a case, no matter how much he might want Aki.


When a high ranking official’s daughter goes missing and feared dead, Shane has no choice but to ask Aki to use his abilities to help him track down the kidnapper. The case opens a door to a past Aki thought he had escaped. Will Shane’s love be enough to save them all when something dark is awakened inside of Aki? 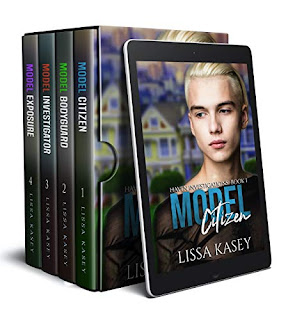 Model Citizen: Shattered by the death of his brother, Ollie is struggling to put one foot in front of the other. Kade, his brother’s best friend, entering the picture seems like the help and comfort Ollie needs. Trusting this older man with his secrets, much less his heart, is something Ollie isn’t so sure is a good idea.

Between the two of them they’re going to need to come to grips with their budding relationship, and learn to trust, before their current investigation kills them. Literally.


Note: This MM romance features a tattooed ex-Marine, a former model with a passion for manties and sticking his nose into mysteries, and a bunch of reality TV stars with the habit of getting murdered. Second edition.

This is getting really hard. So many books. So little space. I'll finish with two books/series that I keep going back to. they are totally different, in content and tone. Again, one is fantasy and the other is contemporary. One is dark and serious while the other had me laughing out loud and snorting various drinks. It also reminds me of driving home, with both (adult) children, from a fantastic weekend. It was memorable because it was one of only two occasions since my daughter left home (wow it was 15 years ago) that we all went away for a weekend together. I'm rambling, so I'll get on with it 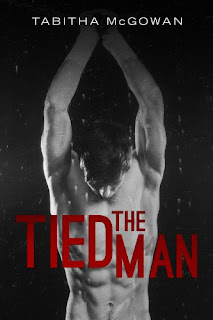 Lilith Bresson, an independent, successful young artist, is forced to travel from her home in Spain to the wild borderlands of northern England, to repay her feckless father’s latest debt by painting a portrait of the enigmatic Lady Blaine Albermarle.

On her first night at Albermarle Hall she meets Finn Strachan, Blaine’s ‘companion’, a cultured and hauntingly beautiful young man who seems to have it all. But Lilith has an artist’s eye, and a gift for seeing what lies beneath the skin. She soon discovers that Blaine is more gaoler than lover, and if the price is right, depravity has no limits.

As the weeks pass, Lilith finds that she too is drawn into the malign web that her patron has spun, yet against the odds she forges a strong friendship with the damaged, dysfunctional Finn. In a dark, modern twist to an age-old story, Lilith Bresson proves that sometimes it’s the princess who needs to become the rescuer. 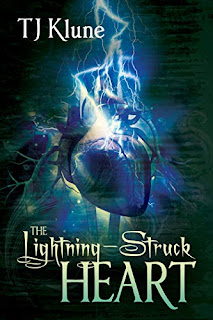 Once upon a time, in an alleyway in the slums of the City of Lockes, a young and somewhat lonely boy named Sam Haversford turns a group of teenage douchebags into stone completely by accident.

Of course, this catches the attention of a higher power, and Sam's pulled from the only world he knows to become an apprentice to the king's wizard, Morgan of Shadows.

When Sam's 14, he enters the Dark Woods and returns with Gary, the hornless gay unicorn, and a half-giant named Tiggy, earning the moniker Sam of Wilds.

At 15, Sam learns what love truly is when a new knight arrives at the castle - Knight Ryan Foxheart, the dreamiest dream to have ever been dreamed.

Naturally, it all goes to hell when Ryan dates the reprehensible Prince Justin, Sam can't control his magic, a sexually aggressive dragon kidnaps the prince, and the king sends them on an epic quest to save Ryan's boyfriend, all while Sam falls more in love with someone he can never have.

Or, so he thinks.