Here we are again at a Wednesday. Today, it is the day before Halloween, or Samhain as it's called by Pagans all over the world. Our trimmings are up and we are prepared for the ritual tomorrow night. Tonight we are going to be staying at a hotel in Cardiff as a Half-Term treat for my son, and tomorrow we're having a fun day before we come home for our ritual and party. It's a bright spark in what's been a difficult time. I'm still not feeling up to the mark but much better so I'm looking forward to our treat. In the meantime I offer a treat for my readers - the latest chapter in Catherine's revenge, my spooky story written in honour of all things scary.

This week I chose this prompt 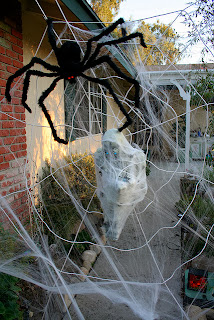 Emma’s headlong dash brought her to the edge of a sparkling lake. She scanned the banks for any sign of her brother. There were none. Away to one side, the sun glinted off a building that seemed to be made of glass. The summerhouse.  Without hesitation, she sped toward it, determined to save Ash from whatever fate awaited him there.

A set of rickety steps led to a veranda which circled the building. In places, they had fallen through and Emma clung to the rail, keeping as close to the edge as she could.  At the top of the steps a set of ornate wooden doors stood ajar.  Emma squeezed through into the dimness beyond.

The interior was a real shock.  The summerhouse was completely circular and lined floor to ceiling with mirrors.  Some of them were cracked, which lent a strange fractured feel to and already eerie room.  At the centre of the domed ceiling, a massive chandelier hung, suspended, and the wooden floor was scattered with shards of crystal which had fallen over the years.

Off to one side, a long white sideboard, faced with gold held a simple wooden box.  The lid was open, and tinkling music rose from it, flying around the room, sharp as shards of falling crystal.

The only colour anywhere was the red t-shirt Ash wore. He was standing in the middle of the room staring into a mirror.  Emma wondered why he’d taken off his jacket, when it was so cold their breath caused clouds of steam to billow from their mouths.

He didn’t respond in any way.

“What’s wrong?  What are you looking at?”

Ash ignored her, as if she wasn’t there.  At first, Emma was annoyed, believing he was playing with her, but she quickly began to grow afraid.  She crossed the floor, her feet crunching on broken crystal.  Cobwebs brushed her face and she screamed when faced with a huge spider on a silken thread that seemed to dare her to pass.

“Ash?  Are you alright?”  He was entirely blank, his wide eyes, identical to her own, fixed and staring, the pupils tiny dots in a sea of cornflower blue.

“Ash.  What are you doing?  Stop messing about.”

The tinkle of the music box jarred her nerves and she strode across the room to slam the lid.  A sigh behind her made her whirl in time to see Ash fall to his knees. Emma ran to him and flung herself onto her knees.  She was afraid to touch him, afraid to speak.

He raised his head and stared at her, his eyes confused.

“Emma?  What are you doing here?  Where did that woman go?”  He looked around.  “What am I doing on the floor?”

“The woman in the white dress.  She was dancing.”  Ash frowned, looking even more confused.

“There was no one else here, Ash. I would have seen her.”

“But she was here.  I saw her.  I came in and she was dancing, right here, in the middle of the room.  There was music, and she was dancing.  Twirling and spinning.  She was beautiful.  I watched her for ages, until the music stopped. She came to me and held out her hands and then we were dancing and everything was spinning.  But there was no music… and she said there needs to be music and sent me to open the box,  and I did and… and I… and then… and then you were here.”

“What happened to your jacket?”  Emma reached out and touched him  “For God’s sake Ash, you’re freezing.  You’ll catch your death.  What have you done with your jacket?”

Stiffly, he got to his feet and looked around.  There was no sign of his jacket.  He walked over to the music box and ran his hands over the polished wood.

He turned to look at her over his shoulder.  The life was back in his eyes and they were twinkling with mischief.

“I don’t know but please don’t.  I don’t like it. There is something really spooky about it.”

“Spooky?  A box?  Strange, I can’t remember what tune it played.”

Before she could stop him, Ash opened the lid of the box and the twinkling music started again.  Ash went very still.”

There was no response.

She ran to close the box but, as she reached for the lid Ash caught her hand and, with surprising strength, he pulled her in his arms and began to dance.  They whirled around the room, faster and faster and the harder she struggled, the tighter he held her and the faster he spun her.  The glass sparkled and glittered, mesmerising her.

She may as well have talked to the mirrors.  He was aware of nothing but the music and the need to dance.  Looking over his shoulder, Emma saw a flash of white in the mirror, growing bigger, and she panicked.

Suddenly Emma remembered Tristan’s warning.  “Don’t try to fight on your own” The memory was reassuring but useless.  How could she not fight alone? There was only her.  No, not just her; there was Ash.  Perhaps he might not be himself, but he was another person, another part of her.

Concentrating, with every ounce of her being, Emma began to throw her body into the dance, gradually directing the course of their spinning toward the sideboard and the box.  It was a race against time as, all the while, the white blur grew larger and clearer and closer.

Have a great Halloween / Samhain everyone