Here comes Wednesday and my men in white shorts. Unfortunately, none of them have the hair or 'tude to float my boat, but hey, the shorts are nice and white.

The prompt I used this week was the masquerade masque, because this is a spooky story and I've always thought masques are spooky 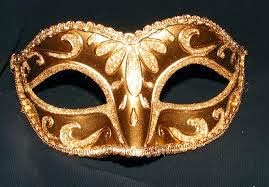 As soon as they entered the hall, they were met by their father who, although alight with excitement in a way they’d not seen for a very long time, was not at all pleased they’d disappeared for so long.  He immediately set them to work on numerous tasks, which meant that Emma didn’t have a chance to speak to Ash again until late that evening. The sleeping bags were all neatly laid out in one bedroom, which had been roughly cleaned, and they were all sitting around a roaring fire in a small sitting room, which had been cleared of dust sheets, if not dust.

Adam Benson was cheerfully feeding the fire, holding a piece of bread in the flames with a long pronged fork.  The bread was instantly carbonised and he handed it brightly to Emma who dropped it unenthusiastically onto the plate with the rest of the slices, which each contained a slightly different pattern of charring.

“Can’t beat toast made over an open fire.”

“Well, no, but only if it’s made properly.  I’m not going to eat burnt toast.”

Adam sighed and raised his eyes heavenward.  “Kids! Alright, alright, I admit defeat.  Ash, go get the hamper out of back of the car.  It seems your sister must dine on the sweeter things of life now that we’ve gone up in the world.”

Ash had pushed his chair up close to the fire and was staring into the flames, lost in the flickering dance.  He didn’t respond to his father’s instruction.

A
sh looked up, startled, his eyes seeming dazed in the flickering firelight.

“The hamper? From the car? Seems Emma draws the line at charred toast.”  When Ash continued to stare at him as though he were speaking some foreign language, Adam gave an exaggerated sigh and got to his feet.  “Bloody kids.  You’re like children the pair of you — disappearing for half the day to play in the woods, then mooning about expecting to be fed, without working for it.”  But his voice was playful, and he stroked Emma’s head as he passed on his way to the car.

Ash immediately went back to staring into the fire, and Emma watched him, wondering.

“What happened in the summerhouse this afternoon, before I got there?”

“What?” Ash blinked at her, still looking dazed.

“What happened to you?”

“You said you saw a woman.”

“Hm.  What happened to your jacket?”

“Yes.  You had it on when you went in, you didn’t have it when you came out, and it certainly wasn’t in there, I looked.”

Ash shrugged, looking as though he really didn’t want to continue the conversation.

“And why did you get so weird when the music box was playing?”

“The music box that was on the sideboard.  As soon as you opened the lid you went all strange and you made me dance with you. You wouldn’t stop until I closed the lid on the box and threw it at the mirrors.”

“Oh, so it was you who shattered the mirrors.”

“Yes. I threw the box at one and they all shattered.  Don’t you remember?”

Ash shrugged again and hunched further into the chair.  He looked pale and strained, and she knew he was keeping something from her, she could always tell.

“Nothing.  There’s nothing up.”

Ash turned to look at her and his eyes were strange, dark, with flames from the fire reflected in the pupils.  Something in them made her shiver.

“I don’t know.  I feel.... I feel.... like....” Ash ran his hands through his hair, trying to find words.  “I feel like everything that happened since I went into the summerhouse has been a dream and I still haven’t woken up. Except, in some ways it feels like I’m more awake than I’ve ever been.”  He shook his head and sighed.  “I don’t know.  I’ve no idea what I’m talking about.” He turned back to the fire and held his hands out to the flames.  “It’s so bloody cold in here. That doesn’t help. It makes me feel like my head is full of ice.”

“Ash….” A wave of fear washed over her. For a moment, as she looked up at Ash, she saw something, someone, looming over him; a woman in white, wearing a masquerade masque. She blinked and it was gone.

“Emma.” Adam burst through the door, accompanied by a blast of cold air. “There’s someone here who says he knows you. He won’t come in. Says his name’s Tristan, or something.”

Emma glanced up in surprise, at the tone of Ash’s voice. He was glaring at her, flames flickering in his eyes. It suddenly occurred to her to wonder how the fire was reflecting in his eyes when he had his back to it.

“You shouldn’t talk to him.”

“Because I forbid you.”

“You what?” Emma was more worried than ever. Ash wasn’t himself. It definitely wasn’t Ash speaking. It didn’t even look like Ash. The way he held himself, the tilt of his head, the tone of his voice. None of it was Ash. It was her. It all made sense. Ash felt cold, because of her. The figure she’d seen looming over him, was her.

Terrified, all she could think of was Tristan. He knew what was going on and he’d help her fix it. He had to; he was the only one who could.

She turned and fled, hearing Ash scream after her. “Emma Loughbridge, you will not speak to that man. I command it.”

What will Tristan have to say? What will Adam have to say? I guess we'll find out next week. In the meantime, check out the rest of our flashers