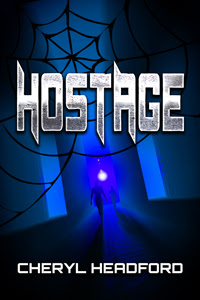 At last!!! It seems like I have been waiting forever for Hostage to get here. It's my very first Contemporary / Sci Fi / Paranormal / Fantasy YA book. Aimed at older teens it's a totally sex free pure adventure and I'm very proud of it. Harmony Ink have worked very hard to polish the book to the best it can be and I can't wait to share it.

I'll post an exclusive excerpt here, another at Rainbow Warriors and a third on My Website, so be sure to check them all for glimpses into my world and meet my princes.

When Astrin Raphael finds himself held hostage in an unfamiliar place, he has no option but to try to have faith in someone who seems to despise him. Little does he know his captor is his nemesis, Rowan Gabriel, whose disdain for Astrin all started with a misunderstanding years ago.

The kidnapping of Astrin’s father and Rowan’s uncle leaves the two princes with no choice but to form a precarious alliance. Rowan casts off his hatred and reaches out to Astrin, but Astrin’s doubt and insecurity run too deep to let go of easily. It’s not until Astrin almost loses his life that he’s able to acknowledge what Rowan means to him and admit to the love forming between them.

Their struggle doesn’t end when they return home and their Houses attempt to broker a deal to determine their future together. Each prince might face a choice between keeping his title and finding happiness with the man he loves.


After about five minutes, Rowan started to feel guilty. There had been no further sound from the bathroom. He fought with himself for a further five minutes, and started to choke on the food so, with a sigh of annoyance he laid aside his plate, got to his feet, and opened the bathroom door.
Astrin had managed to get out of the shower, and dry himself, but had not been able to get his clothes on. He was sitting on the chair, leaning against the counter, resting his head on his crossed arms... and he was crying.
For a brief moment, Rowan felt bad. He knew he was totally responsible for Astrin’s distress, and part of him was gleeful about it. The part that felt bad was pretty disgusted by that. It was only a brief moment though, and after that he just got mad.
“What the hell are you doing? You’re going to get ill again. Get dressed.”
Astrin looked up, his eyes swollen and distressed. “I tried,” he whispered. “I really tried, but I got so tired.” He gulped.
“Oh, for goodness sake.”
Far more roughly than necessary, Rowan helped Astrin dress, and supported him out of the bathroom, depositing him on the bed. Then he pushed the trolley over to him with his foot.
“Help yourself.”
“I’m not hungry.”
“I’ve been told to make sure you eat, so you’re going to eat if I have to stuff it down your throat.”
“But I...”
“Eat, Astrin.”
With a sigh, Astrin reached out and took a sandwich. He nibbled at it delicately, his face twisting as he tried to swallow.
Rowan watched impassively, inwardly smiling. This was going to be rewarding after all. If his uncle thought he was going to use this time to get to know Astrin, he was sadly mistaken.  He was going to use it to torture him in every way he could.
Rowan lounged back in the chair, and watched Astrin struggle through a few bits and pieces, then got frustrated and annoyed, when he threw up on the floor, failing to make it to the bathroom.
Astrin crouched on the floor panting and apologizing. Rowan ignored him, as he cleaned up. Just as he was finishing the door opened and Ragnor came in. He looked at Astrin, then at Rowan, and narrowed his eyes.
“Rowan? What’s going on here?”
Rowan scowled. “You told me to make sure he ate. I made sure he ate, and he threw up.”
“What’s he doing on the floor?”
“He fell over trying to get to the bathroom.”
“It’s all right,” Astrin said, in his soft voice. “I’m not hurt.”
“That’s not the point.” Astrin shrank from the severe tone in Ragnor’s voice. “The point is, Rowan, that Astrin is your charge, and for as long as he is your charge it is your responsibility to take care of him. And that means he takes priority over everything— including cleaning up. Do you understand?” Rowan hung his head. “Do you understand?” Ragnor repeated sternly
Rowan snapped. “Yes. I understand.”


“Good. I would hate to think we misunderstood each other.” Ragnor’s eyes locked with Rowan’s and it was Rowan who turned away first, although he made sure Ragnor didn’t miss the look of pure poison he gave Astrin, before he got up and stalked into the bathroom.

Poor Astrin. Rowan is going to make his life hell for a while, but oh boy is Rowan going to regret it later.

I hope by now you're all desperate to get your hands on the book, so here are the sales links for you