Here is another Wednesday, the day before school starts. I know a lot of parents can't wait for school but we've had such a good time this year over the summer, I'm probably more devastated than he is :)

Anyway, lets cheer myself up with another flash and a picture of kittens, which is the prompt I chose this week 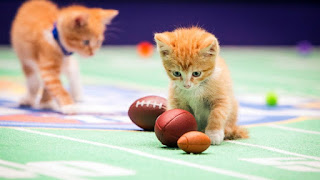 I am still so confused. One minute my love is grovelling at the feet of a tyrant, and the next he is being petted by the most beautiful woman I have ever seen, while the very tyrant watches with an expression alternating between fondness and distain. Jandra seems as confused as I am.

“What the hell’s going on?” she asks.

“Jandra, please,” her mother scolds. “There is no need for coarse language.”

“Coarse language? I’ll say a lot worse if you don’t tell me what’s going on.”

“All in its time,” the queen says. She holds her hand out to me. “Come, sit with me and we will talk.”
I glance at the king, who nodded. There was none of the fondness in his eyes they held when regarding his son, but that is as it should be.

I sit down, but not in the seat indicated by the queen. I must be with my prince and, as there is no place for me on the seat beside him, I sink to the ground and lean against his leg. I feel the shock shudder through him, and his hand on my hair appears to be a reflex. Nevertheless, it feels good.

I jump, startled, when something cold and wet touches my hand, Ducking my head slightly reveals a basket, half under the seat, which contains a kindle of sleeping, orange and white kittens. The heart–warming cries of the waking creatures soften my heart as they tumble over each other and climb out of the basket on wobbly legs.

One of the kittens, braver than the rest, had already approached me, and its nose what the stimulus that prompted my attention. This little fellow led its brothers and sisters in a rough–and– tumble game to scale my legs.

“You certainly seem to have a way with animals, Tian,” the Queen said, leaning down to fondle one of the kittens with her small, neat hand. “These are no ordinary kittens. Are you familiar with firecats?”

Familiar with them? I shudder. Firecats are the fiercest wild cats in the kingdom. Whilst not among the largest in the feline community, they were feared for their keen hunting instinct and wild natures. They are called ‘fire’ cats because the merest scratch from their razor caws burns like fire and their poison sends fire through the blood. These are kits though, so their claws are not yet venomous.

“Indeed, Your Majesty, although fortunately I have not had cause to feel their fire for myself.”

The queen laughed. Taking a handful of nuts from a bowl at her side, she scatters them, and my prince’s leg shakes as he laughs at the antics of the kittens as they chase the nuts, tumbling and falling over each other.

“If you’ve had enough playing with the kittens,” Jandra says sourly “perhaps someone can tell us what the hell’s going on.”

“Relax, dear,” the queen says, “your father can explain everything.”

Everyone turns their eyes toward the king who straightens his back and clasps his hands behind him.

“I believe we owe you an apology for the treatment you were given. However, had you heeded your father’s advice, it would never have happened.”

Of all the things I might have expected to hear, this was the least of them. I do not need to wrack my brains to recall the advice of which he speaks. The last I spoke to my father he had forbidden me to leave our lands until he had made proper arrangements. If only I had listened. But the call of my heart was too loud.

“You father and I have been talking for some time. Do you realize your rash actions might have caused years of talks and careful planning to swept aside, or at the least put back by a significant portion.”

“Neither do I,” my betrothed ventured, his forehead furrowed by concern. “You knew?” he says, his voice coloured with anger. “All this time you knew where the demons were, and you were talking to them? Why did you allow the myths to continue? Why did you not tell everyone the demons are not demons; are not a threat?”

Warmth floods my heart that my prince would defend me so.

“Oh they are a threat. Make no mistake with that. They are the greatest threat we face, which is why I have been working so hard on the talks. I will not go into any of that; not in Tian’s presence. Such things are best discussed around a negotiating table with ones cards tightly clutched to one’s chest.”

“It is our way to have our cards laid down face upward on the table, if indeed we have cards at all.”

“And that is why your kind have been driven into the darkness of the swamps while we bask in the sunshine.”

Amusement suffuses my body with warmth. It bubbles in my heart and lifts my spirit. “If that is what you think,” I say, with a warm smile for my beloved, “then you have not seen as many of our cards as you believe you have.”

“What do you mean?” the king asks sharply.

“It is for me to explain. If my father has not seen fit to invite you in to our heartland, it is not for me to tell you what you would find there.”

“You are as slippery as your father.”

“Not at all. I just do not wish to upset the balance of the negotiations. You appreciate that I would not be so well received at home were I to have upset the talks to our disadvantage.”

The king laughed, a deep, sincere laugh. “You are your father’s son, no doubt. Remind me when next we speak, to inquire why he did not see fit to inform me that when you came seeking a mate, it would be my son and not my daughter you claimed.”

“Does it make a difference?”

SO there we go. The secret is out. The king has been negotiating with demons. I wonder how that will go down - with the people of the kingdom, and the demons. Come to think of it, why were they negotiating? What changed to bring them together? Might there be a common threat perhaps? Something neither of them has a hope of defeating alone? Is it physical or some kind of plague? Oooh, I have no idea. Can't wait to write it to find out.