Another week rolls around and it is as if Christmas had never been, To cheer us all up I chose the rainbow as the picture this week. A rainbow to represent my Demon and his Prince. Their world doesn't know it yet but the two of them will be rainbow in their time of darkness. 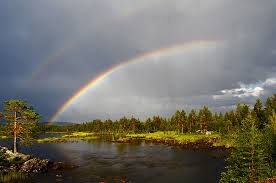 I am exhausted. The meeting was long and difficult. It is difficult to sit quietly when men are arguing that you and your people are little more than animals and should be exterminated. It is fortunate that these men were in the minority, and I was able to go a long way to sway even them. I cannot be entirely sure, but I believe the meeting was successful and that my sham union with the princess has been accepted. The king appears pleased, at least.
I am glad it’s over, at last. Now I can rest with my true love and drop the pretence that I am enamoured by his sister. She is nice to me now, but I will never forget the expression in her eyes as she tortured me, or the heel of her show piercing my body. Without my prince’s healing touch the wound would have killed me.
My prince is asleep, laid out on the chaise in the room where I left him. His mother, the queen, watches over him with a gentle, loving smile. A flush of gratitude washes through me and understanding passes between us. She nods as she rises, an unspoken blessing on our union.
The princess leaves with her mother, and we are alone. Although I am tired, I am in no rush to retire. It is too pleasant to sit and watch my prince sleep. He is peaceful in repose. The worried frown that seems to haunt him, even when his lips smile, is released and his brow is un–creased. He is the most beautiful creature in creation and I am made breathless by his glory.
Castien stirs and a lock of golden hair falls across his brow. When I brush it back his eyelids flicker and his beautiful eyes open and gaze at me with confusion, but only for a moment.
“Tian.” My name flies from his lips, the sweetest word I have ever heard. He does not ask about the meeting, does not care whether we are alone or in company. My love throws himself into my arms and that is where he belongs.
A greedy kiss precedes his inevitable question. “How went the meeting? Are you accepted?”
“I believe so. Your father, at least, is pleased.”
Castien breathes a relieved sigh. “Then all goes well. What will happen next?”
“I don’t know. Your father is still in Council. We were excused due to weariness from the journey.”
“And the torture,” Castien says, bitterness lacing his voice.
“That is past. We must set our eyes to the future and we will soon be together in my home where you may enjoy the hospitality and acceptance of my people.”
“I know where we can be together sooner than that,” Castien says, the gleam in his eyes making clear his intention.

Guards wait at the chamber door. They say nothing, but escort us safely to the prince’s chambers. They, at least, know the truth.
We make our way to Castien’s chambers by a different route and arrive far more quickly than I expected.
No sooner is the door closed behind us, than Castien throws himself into my arms and takes my breath from me with the intensity of his kiss.
“Take me to bed,” he gasps, his voice rough with desire. Although I am exhausted, I will deny him nothing. He is a little thing, so I lift him in my arms and carry him to the bed. He kicks and giggles in a manner that many would consider more befitting of a woman, but I know he is no woman, and his unmanly behaviour is no more than an expulsion of fear, and realization that all his dreams are suddenly within his reach.
I realize the full truth of my words when I lay him on the bed and he gazes up at me with sad eyes, once again taking on the grave demeanour I resolve instantly to forever change to joy.
“I never thought I would have someone to love; not like this. In truth I didn’t believe I would live long enough.”
“You are well now.”
“That’s not quite what I meant.” Castien gives me a weak smile. “My father has always wanted me to be more like him. As Jandra is. If she had been the prince, and I the princess, he would have been happy, and proud of us both. But alas that was not the case. Nevertheless he has spent my whole life trying to fit me for the role he had designed for me, believing a true king must have strength of arm rather than of mind.”
Castien gives a deep sigh. “I have known for some time that it was inevitable I would be forced into riding at his side into some skirmish or other. If I managed to keep me seat on the horse long enough, and I did not turn tail and run at the first clash of swords, it would not be long before I would be killed, or taken which might have been far the worse.”
“Surely he would not have dragged you into a battle when you were not fit for it.”
Colour in my prince’s cheeks suggest my words stung and I wish I had bitten off my tongue before I caused him pain.
“I did not mean to suggest you are not good enough to ride at your father’s side, only that you would not have been properly prepared and––”
“Any physically fit, and mentally able and not heartsick at the sight of blood.” He sighed. “Don’t pull back your words. I know what I am.”
“You are a light that shines in a dark world,” I say, meaning every word. I believe he sees my truth and is heartened by it, “a rainbow when black skies weep. There are many who can ride into battle and kill a man; there are few who have the wit and purity to save them.”

Now go check out the other amazing flashers for this week. I'm sure you'll join us in welcoming the wonderful Louise Lyons to our merry band.