Wednesdays seem to come around so fast. They say that time speeds up as we get older, I think it's just that we have more behind us to compare with and I have a lot of Wednesdays behind me. Many of them are full of Wednesday Briefs, and I hope there will be many more

This week I used the prompt Hickory smoked horse buttholes Okay, I cheated a little and used it as an oath, but I still think it's a pretty good one. In honour of the horse in question I chose a picture too 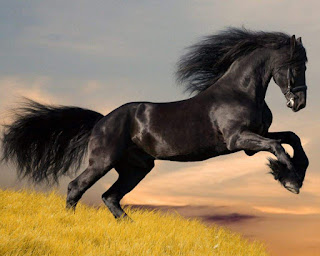 Fear grips me so hard I can’t breathe. What is this? What is he doing to me? This can’t be normal. This intensity. This pleasure. This pain. If others had felt this I would know. No one could go through this and be unchanged.
Sensations unlike any I have ever felt before are building in me and I can’t contain them. I can’t cope any longer. I can’t take any more.
Tian withdraws and I can breathe again. He pauses, gazing down at me with so much love shining in his eyes. My body relaxes, and in fact I feel a little bereft that the feeling of fullness and completion have gone.
A shadow passes over Tian’s beautiful face and he frowns briefly. A flutter of fear increases my heartbeat and peaks when he says “Forgive me.”
Forgive what? Before I can ask he plunges into me and all thoughts disappear in the tearing, glorious pain.
I can’t breathe. I can’t move. A terrible pressure is building in me and I can’t stand it. Something is possessing me and I’m losing myself in it. Terrible fear washes over me and I struggle against it.
It’s alright. Relax. Breathe through it. I’m with you. Let go. I won’t let you fall.
I can’t. I can’t. I can’t stand it. Please make it stop.
Trust me. Let go.
It was hard, almost too hard, but I try. I try hard for him, and it does get better when I force myself to relax. Slowly, the pain morphs into pleasure but even the pleasure is so intense as to be almost unbearable.
No. No. No.
Tension is building and I’m helpless in its grip. I can’t bear it. I can’t. It’s too much and I’m afraid. Not even Tian’s soothing voice can make it okay
Take deep breaths.
I’m trying. And I am. I’m trying hard; really hard. Oh Heavens it’s amazing. The deep breathing is finally working and the waves of pleasure are less overwhelming. A knot of tension in my belly is pulsing, clenching around Tian’s penis as it thrusts rhythmically and deeply into my body. Ah. Ah, Gods. Shining Gods what are you doing to me?
“Ssh. Relax. You will come now. Do not fear, it will never be this intense again.”
Before I have time to think about what he said, my entire body contracts and convulses. The knot of tension releases and wave after wave of intense pleasure rip and ripple through me. I can’t catch my breath, but when I do I scream, and keep on screaming as convulsions batter at my brain and tear down walls I hadn’t known were there. My mind and spirit are shredded and claw at Tian, desperate to get him away from me, to get him out of me. He’s invading me. Every part of me, and I have no defences.
Breathe. Relax. Ride it. It will be over very soon. I’m so sorry.
It goes on forever. I have no control. My body shudders and pulses, slowly turning to mulch. I’ve lost control of everything and I truly think I’m dying.
Oh Heavenly Mother, no. I didn’t mean to do this. I didn’t know it would be like this. No one told me it would be like this. Oh Mother of Darkness, save us.
Tian sounds panicked and it scares me even more. I don’t know if he’s still inside me or not. All I know is that he’s holding on to me for dear life, and I am holding on to him. He’s shaking too, his body shuddering and convulsing.
The screams have died, the struggling ceased, the hartbeats stilled. Silent dark prevails. I am dead. Tian is too. There is no more.
“Are you alright?”
Groaning I turn my face away. “Go away, I’m dead.”
“Not quite.” Tian’s hand gently caresses my shoulder and I shiver. By body is leaden, but it’s a good heaviness. The heaviness of rest after hard labour.
“Are you sure I’m not dead?”
“I’m very sure.”
“What happened?”
“How much do I have to explain?” Warmth suffuses my body and I try to turn my back, but Tian won’t let me. “I’m sorry. That was cruel. To be honest, that wasn’t…normal. I…should have told you, but….”
Now it’s Tian’s turn to avoid my glance.
“What do you mean? What did you do?”
“I…claimed you.”
“Claimed me?” I said slowly, suspicion making my words sharp. “What does that mean?”
“I don’t know. I…. Wait.” He forestalls my demands, chewing on his lips in such an endearing way
I would have smiled had my mood not been so far removed from amusement.  “When we…when we find our bonded our first touch marks us as mates, but in order to cement the union we need to make a claim. I…don’t know how to explain. I wish I did. Put simply, I opened myself to you – opened myself completely. Every part of me reached out to every part of you…and you accepted me.”
“Accepted? How could I accept you when I didn’t know what was happening?”
“Knowledge often plays no part in the inner workings of the mind and being.”
He sounds apologetic and that makes me angry, so angry. Didn’t I have the right to decide if I wanted him to do…whatever he’d done? Didn’t I have the right to choose if I wanted…what? To be his bonded? His mate? Hadn’t I already made that decision?
Tian gave me space to think and what I thought, after going round and round in circles for a while, was this
Hickory smoked horse buttholes, I think I just kinda got married…and it’s okay. It’s more than okay. So, so much…more.
A moment of blissed out satisfaction was shattered by the bellow that came from the doorway
“What in the name of the Gods is going on here?”