Meant For Me by Ann Lister 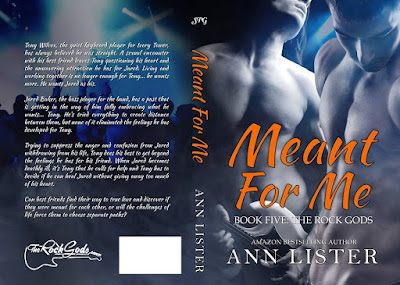 Tony Wilcox, the quiet keyboard player for Ivory Tower, has always believed he was straight. A sexual encounter with his best friend leaves Tony questioning his heart and the unwavering attraction he has for Jared. Living and working together is no longer enough for Tony... he wants more. He wants Jared as his.
Jared Baker, the bass player for the band, has a past that is getting in the way of him fully embracing what he wants... Tony. He's tried everything to create distance between them, but none of it eliminated the feelings he has developed for Tony.
Trying to suppress the anger and confusion from Jared withdrawing from his life, Tony does his best to get beyond the feelings he has for his friend. When Jared becomes deathly ill, it's Tony that he calls for help and Tony has to decide if he can heal Jared without giving away too much of his heart.

Can best friends find their way to true love and discover if they were meant for each other, or will the challenges of life force them to choose separate paths?

“Is that the best you got?” Tony asked.

Jared swirled the liquid around in his glass and thought about Tony's question. That wasn't the best he had by any means, and he hoped he had many, many years to show Tony over and over the best he really did have to offer him. Just thinking about their years ahead made a lump form in Jared's throat. He'd never imagined being one half of a couple, or having something long term with a lover, but Tony changed all that and now Jared couldn't imagine anything else. “You are the best of me,” Jared said softly. “You are the one truly meant for me. I am certain of that as much as my next breath. You are my 'forever,' T, and starting this journey here with you in this house we now own together...I feel so lucky.” Jared's voice trailed off as emotion chocked his throat.

“Weren't you the one that said luck didn't have anything to do with us?” Tony questioned.

Jared nodded. “I did say that, but Jesus, Tony, having you in my life has totally rocked my world in the best possible way. I honestly never thought I'd have this kind of feeling or relationship in my life. All that searching and it always came right back to you.” 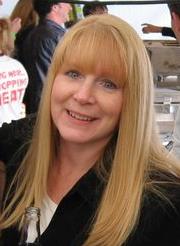 The Rock Gods series gave her Bestselling Author status on Amazon. Each book in this series brings her two favorite elements together: musicians and the love between two men. These stories focus on what it truly means to love; love unconditionally, love without restrictions or labels, love without fear or judgment – to just simply love.
Author Links:

Take What You Want (Part 2) 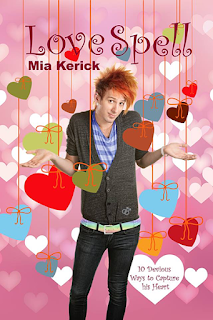 Blurb:
Strutting his stuff on the catwalk in black patent leather pumps and a snug orange tuxedo as this year’s Miss (ter) Harvest Moon feels so very right to Chance César, and yet he knows it should feel so very wrong.
As far back as he can remember, Chance has been “caught between genders.” (It’s quite a touchy subject; so don’t ask him about it.)  However, he does not question his sexual orientation. Chance has no doubt about his gayness—he is very much out of the closet at his rural New Hampshire high school, where the other students avoid the kid they refer to as “girl-boy.”
But at the local Harvest Moon Festival, when Chance, the Pumpkin Pageant Queen, meets Jasper Donahue, the Pumpkin Carving King, sparks fly. So Chance sets out, with the help of his BFF, Emily, to make “Jazz” Donahue his man.
An article in an online women’s magazine, Ten Scientifically Proven Ways to Make a Man Fall in Love with You (with a bonus love spell thrown in for good measure), becomes the basis of their strategy to capture Jazz’s heart.
Quirky, comical, definitely flamboyant, and with an inner core of poignancy, Love Spell celebrates the diversity of a gender-fluid teen.

That’s when my cell phone, which I placed on my chest before I lay down on my now “love-spell-pink” wrapped mattress, starts singing Express Yourself.

Yaaassss!!! This is what ninety-nine percent of my insides shout. One percent says quietly, “It’s about frigging time you called, asshole.”

But my voice is calm. “Jasper,” I say blandly. In my opinion, he hasn’t earned the right to be called Jazz any longer.

I try not to roll my eyes even though I know he won’t see, but it’s an epic fail. “Whatever.”

“I’m sorry I haven’t been in touch for a couple days. My mom’s been real sick. I was lookin’ after her, gettin’ her to the doctor, goin’ to the pharmacy, bringing JoJo back and forth to school, and stuff.”

“Mom caught JoJo’s strep throat and had to go to the ER because she couldn’t even swallow.”

He stops talking for a second and then clears his voice. “Alls she could do was spit into a rag
whenever she needed to swallow.”

Well, that’s definitely TMI, but I get the fucker-nelly revolting picture. “I’m sorry.”

And then there’s silence.

“Gonna take JoJo to the library after school tomorrow. But first I gotta stop by the cable company and pay up or we’re gonna lose our TV and internet at home. They already warned us like twice.”

“Want me to pick up Yolo at school and take her to the library?” I’m so freaking pissed off at him. Why am I offering to save his ass again?

“That’s cool of you to offer, but there’s a bus she can take to the library from her school. Could ya be waiting for her at the library, in case I get held up?”

“I’m not gonna be at lunch tomorrow seein’ as I’ll probably be collecting my makeup work. So, I’ll see ya at the library. ‘Kay?”

I don’t say kkkk cuz it’s not even slightly cool. “Sure. The libes after school, it is.”

One more silence, and then I say, “Later.”

I have research to do. 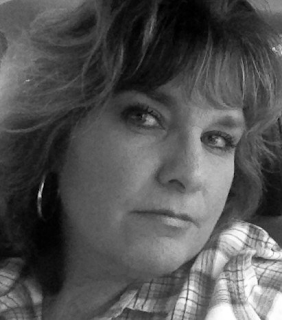 Mia Kerick is the mother of four exceptional children—all named after saints—and five nonpedigreed cats—all named after the next best thing to saints, Boston Red Sox players. Her husband of twenty-two years has been told by many that he has the patience of Job, but don’t ask Mia about that, as it is a sensitive subject.
Mia focuses her stories on the emotional growth of troubled young people and their relationships, and she believes that physical intimacy has a place in a love story, but not until it is firmly established as a love story. As a teen, Mia filled spiral-bound notebooks with romantic tales of tortured heroes (most of whom happened to strongly resemble lead vocalists of 1980s big-hair bands) and stuffed them under her mattress for safekeeping. She is thankful to Dreamspinner Press, Harmony Ink Press, CoolDudes Publishing, and CreateSpace for providing her with alternate places to stash her stories.
Mia is a social liberal and cheers for each and every victory made in the name of human rights, especially marital equality. Her only major regret: never having taken typing or computer class in school, destining her to a life consumed with two-fingered pecking and constant prayer to the Gods of Technology.
Stop by Mia’s Blog with questions or comments, or simply share what’s on your mind. Find Mia on Facebook, Goodreads, and Amazon.

Facebook: http://www.facebook.com/mia.kerick?fref=ts
Twitter: http://twitter.com/MiaKerick
Pinterest: http://www,pinterest.com/miakerick/
Goodreads Link: http://www.goodreads.com/author/show/6474518.Mia.Kerick
https://www.goodreads.com/book/show/25550836-love-spell
So, this is where to FIND the author but we want to know a bit more about her, so lets ask her some questions and see what she has to say for herself

Hello, and thank you so much for welcoming me to answer some very random interview questions in my Book Tour promoting Love Spell, my June 1st release from CoolDudes/YoungDudes Publishing.

Do you have a specific writing style?
I don’t know if you could really call it a style, but I definitely have tendencies. I have a tendency to use a youthful-sounding author’s voice, which I attribute to my perpetual emotional age of fifteen. Even when I’m writing adult novels. I often write informally, and I love slang and idioms and cliches. Call me a criminal! (See, I did it right there.) I have a tendency to write long and complicated sentences, or short brief ones, and it seems I never take  the middle of the road in this area. Do these things add up to a style? I really don’t know. I write from my heart and what comes out is what comes out. (I hope you like it, that’s all!)

How do you come up with the titles?
I find coming up with titles a combination of FUN and STRESS.
The fun part can be likened to smearing fudgy frosting on a chocolate cupcake. I thrive on anticipating how well the two parts (frosting and cupcake/story and title) will come together as a whole. I love searching key words for related idioms that might fit my story.
And sometimes I know the title from the very beginning of my writing, for example, Not Broken, Just Bent was named before the story was fully conceived, because I was inspired by the song to write it.   So music is a great source of both inspiration and titles.
The STRESS part comes in when I start dwelling on how important the title is. I want to attract readers, and I want it to be true to the story. I want it to have that perfect ring, but I don’t want there to be a hundred other books of that same title on Amazon. Sometimes I think I have come up with the absolute perfect title and when I search for it online, I realize I am not the only author who had that thought.


If you were not a writer what else would you like to have done?
Interesting question, and I’d have to say that I did the other things I wanted to do, as far as careers go. I was a middle school teacher for ten years and I loved it. The kids were great, and writing lesson plans—incredibly creative Geography lesson plans—was my passion. After I taught for ten years, I became a mom, and I was fortunate enough to be able to stay home with my four children for the next eighteen years. I put the same energy into their birthday parties and play dates as I put into my lesson plans. When the youngest of the four was in middle school, I picked up writing, which allows me to be flexible with my time and to spend as much time as I want to with my family.

Who in history would you like to have met?
I would have loved to have met Freddie Mercury. He was what my childhood dreams were made of, and in my opinion, the most talented of all male vocalists. I admire his vocal abilities that are unbelievable, his musicianship, and his stage antics. What an amazing entertainer!

What do you always order in a favorite restaurant?
A tuna melt. Love me a good tuna melt.

And on that note, I will go make a sandwich. Answering interview questions is hungry business!

a Rafflecopter giveaway
Posted by Nephy's World at 13:35 1 comment: