It's been a while. Life has a funny way eh? But I'm back. Hope you like this week's installment of Demon.

This week I chose the prompt 'Let it bleed'

The cat scratches my hand, and I draw it back, watching a bright bead of blood well and fall, as I waited for my father’s answer.

“A difference? Yes, it makes a difference. In some ways we a progressive kingdom. In others, sadly not so. If you had claimed my daughter we could have used the union to promote harmony and co operation. My people, however, will not accept a union between yourself and my son.”

Was there a hint of sadness in his voice? Or is that just wishful thinking? Was I mistaking disgust for sadness? Or disappointment?

“I don’t understand. Why would there be such a difference. Your son is in no way deficient. His intrinsic worth is no less than your daughter and his spiritual potential is far greater. My beloved will become a great man, so why would your people not accept him?”

I cringe, licking the blood from my hand. My love speaks beautiful words but they will only make my father angry. My father worships Jandra, and for anyone to suggest I’m even fit to lick her boots is putting themselves in his firing time.

My mother’s voice startles me, as does her hand that bats mine away from my mouth. She takes in and examines the scratch.

“Let it bleed. It will clean out any germs. You’re lucky they’re only babies. It will be fine.”

It’s hard to smile at her, especially when my father is so silent, glaring at Tian as if he wishes to tear him apart.

“I used to believe,” my father says, turning away, “that your people were savages. That your practices were heathen and disgusting. I used to be a narrow minded fool. If I had not had the greatest fortune to meet with your parents I would have lived and died a narrow minded fool, torturing my own son; trying to make him fit a mould that would have ensured him an early death.”

Is this my father? What is he saying? Is it what I think it is?

“I’ve known for some time. Of course I’ve known, that my son is…different. He never showed any interest in the girls I’ve arranged to…befriend him.”

Is he serious? He’s been trying to set me up with a girl? Who? My mind races, cycling through all the girls I’ve known. Friends who have come and gone. Were any of them really my friends? Were they all attempts by my father to…to what?

My father doesn’t turn to face me.

“The hell it isn’t. Have you been keeping the boys away from me too? Is that why none of them would ever talk to me? Did you get the word out? Have I ever actually had a friend? One who liked me for me, and not because you’ve sent them in to tempt me?”

“Castien, please. We have greater things to concern us.”

“Greater things? Greater things than seventeen years of thinking there’s something wrong with you for not being able to make and keep a friend? Of never feeling truly close to anyone? Never being able to trust anyone? Of fighting so hard to fit in, to be what you want me to be, when you never gave me the opportunity of discovering who I really am? My whole life has been a lie and you say it’s not important?”

“In the grand scheme of things, no it’s not important. We have bigger things to worry about. Now, I was answering your…bonded. In our society love between two men is strictly forbidden. No one, let alone a prince, is permitted to engage in such…acts.”

I feel sick. I wish the floor would open and swallow me whole. This is too much.

“Hush child. This is not easy for your father. I know it’s not easy for you either, and we will talk, but there is more at stake here than your life, as important as that is to me.  Please, just listen.”

There is so much I want to say, so many questions, but I am a prince first, a hurt little boy second, so I nod and keep my silence.

“When your father sent me a message to say you would be coming to me, seeking your bonded, I should have asked more questions. I assumed it would be Jandra, that we could use your union to grease the political wheels that would enable me to bring out association out in the open. With Castien that would be impossible.”

“I do not understand why your people are so…uncivilized on this matter, but I am not a stranger to diplomacy, or protocol. I am a prince too after all. I understand your position, but all I need to know is will you accept our union? Will you stand in our way?”

My father’s shoulders sag. Even from behind he seems defeated, an old man. I might, in other circumstances, feel sorry for him. At the moment I don’t care for him at all, only for the answer to the question he’s been asked. Then he turns and he’s not defeated at all; not old anymore. Powerful.

“I will not stand in your way, but you understand I can’t officially recognize you.”

“Hush Castien.” My mother’s hand on my arm is gentle but firm. My father I could have stood up to, spat at, fought against, but not my mother.

“Father,” Jandra hasn’t spoken until now. I almost forgot she was there. She doesn’t look happy.
When she looks like this she’s unpredictable, and that worries me. As children, when she got that tight–lipped expression I never knew if she was about to fight a battle for me or pinch me ‘till I bruised. “May I make a suggestion? I believe I can be of assistance.”

Shades of Power by Beany Sparks 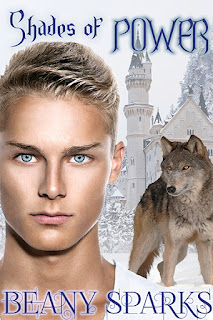 An explosion sends Ethan running…straight into the arms of his mate.

Ethan White is a witch whose days are spent in his apothecary with his familiar, Beema. While making potions for the townsfolk keeps him busy, nothing exciting ever happens—until one day when a surprise visitor walks in and his world crumbles around him. Suddenly Ethan and his familiar are on the run, heading for the Fae to seek sanctuary.

Grayson is an alpha wolf. His two best friends are his betas, but there’s one thing missing—a pack. It’s for that very reason that the three of them were volunteered by the council to act as representatives. Their mission? Try to convince the Fae
Queen to get the Fae involved in a battle with the Midnight Coven, the witches suspected of using the dark arts. However, the mission takes a back seat when Grayson meets his mate for the first time.

With revelations and lies around every corner and a battle looming, they have to be ready to fight if they want to have a life together.

When a prophecy about the Shades of Power comes to light, both sides want the power for the battle against the other. The question is—who will unite them first?

“What are you doing here?” he asked, feeling proud his voice remained level.

“You are not a customer, nor will you be a customer. Tell me what you want and then get the hell out of my shop.”
Ethan had a second to regret his rudeness when she narrowed her eyes at him, but reminding himself that nothing good could come of her visit had him standing there with his head held high.

“I would watch how you speak to me, Ethan, since we both know who the stronger witch is.”

“Well, if you are the stronger witch, then there’s absolutely no reason why you would be in my shop. Make sure the door doesn’t hit you on the way out.”

Ethan watched as her eyes narrowed even further, to the point where he wasn’t sure she could even see him. All the while he waited for her reaction—or rather, the explosion that was likely coming.

Suddenly she blinked and then smiled, which was far scarier than anything Ethan could remember seeing before.

“You’re right, Ethan, I am the stronger witch, and as such, I have better things to do than waste my time making potions. So here I am, ready to purchase the potions I need and help my dear little brother make some money so that he can survive in this big, bad world we live in.”

Ethan almost sighed, wanting to forget about being related to the monster in front of him. No one had believed him when he had accused her of being evil. While everyone else had seen her as a gifted child, Ethan had seen the dark side of her early on. Deep down he’d known that she would turn to the dark arts, but everyone he’d told thought he’d just said that to get attention, even their parents. When they’d died, it had left a huge hole in his heart, but he’d finally been able to escape his sister by using some of his inheritance money to move towns and buy his cabin. Although, he couldn’t really call it escaping when on her way out one day she’d told him to pack his things and be gone when she returned. For the first time in his life, he’d obeyed her.

Snapping back to the present, Ethan tried to focus, knowing that if he didn’t, things could go badly.

She frowned at him for a moment before speaking. “Actually, it’s Ravyn now, Ravyn Darkh. Maybe you’ve heard of me?”

She can be reached at beany.sparks@gmail.com
Or visit her at www.beanysparks.com

a Rafflecopter giveaway
Posted by Nephy's World at 16:31 No comments: