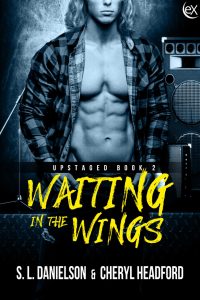 The Von are on their way.  With a recording contract under their belt and a tour opening for a popular band, they have the world at their feet.  For those left behind, prospects are not so bright, especially with someone trying so hard to break them apart.

With the spotlight on The Von, no one sees the evil waiting in the wings until it’s too late.

For more information on the band, reviews, excerpts and much more visit their very own group and receive a Backstage Pass

REVIEW - GIVE YOURSELF AWAY BY BARBARA ELSBORG

One guy intent on caution. One an adrenaline junkie. Love could be one risk too many.

March is determined to lose the numbness that accompanies a history of loss and blame. Desperate to feel something—anything—the adrenaline junkie base jumps off cliffs, soars on hang gliders, and embarks on dangerous sea-borne rescue missions. But any release he feels is fleeting, and when you play Russian roulette with fate, eventually you come crashing down.

​No matter how hard Caleb tries to forget his past, a dark shadow is always behind him. When a bizarre turn of events results in him being trapped in a sea cave, Caleb wonders how his mantra—safety at all costs—could have failed him. On the point of drowning, he’s stunned when March surfaces in the cave.

​March’s disregard for the rules saves Caleb’s life but gets March into a heap of trouble. Not least of which is the guy shivering in the boat next to him. March tries to ignore Caleb but it’s already too late. Together, they take small, awkward steps toward love. But Caleb’s past is waiting to sink in its claws…and this time, it could drag him to his death.

Warning: This book contains difficult flashbacks of child abduction and sexual violence, but also the incredible perseverance of two men who never give up on love—or each other. Bring your tissues and a heart that believes in the resilience of the human spirit.

I read this book some time ago, before I started writing reviews on a regular basis. I think there’s a difference between reading a book just for the sake of it and reading to review. Or maybe it’s just that reading for a second time releases you a little from the tension and allows you to see things you might previously have skimmed over. I know, for sure, that with my favourite books I can read and re read and always find something different.

This isn’t one of my favourite books, but it’s competing with the likes of Sir Terry Pratchett so it was never going to come out on top. Having said that, I certainly won’t be stuffing it in the back of the bookcase either. (or the bottom of the kindle, or whatever)

Caleb and March are not your usual characters, and both have big issues that come out in different ways. While March is a danger junkie, Caleb is so cautious he double thinks himself crossing the road and refuses to try to keep up with March when following him in the car. March’s lust for taking risks, however, comes in handy when he goes against direct orders from his superior on the lifeboat and jumps into the water to save Caleb from a cave.

At first, both March and Caleb are reluctant to start a relationship, for very different reasons. At first, it appears that March is stuck in the closet and reluctant to admit he’s gay. While that is generally true, he is not denying it to himself, far from it. Much of his problem comes from a deep sense of loyalty to a lover he believes is dead. Caleb, on the other hand, has no problem being out and proud, but is also mourning two deceased and one almost deceased lover.

The real problem, however, arises when Caleb begins to wonder whether his past losses may have been linked and March might be next in the chain.

Despite the darkness in Caleb’s past, he’s an utterly engaging character. He’s sweet, funny and full of life. Given his love for all things wild and dangerous, March is much more cautious on a day-to-day basis. They are so, so lovely together that despite the dangerous goings on my main edge-of-the-seat moments came from their misconceptions and misunderstandings. Being privy to their thoughts makes things both better and worse.

There were some idiosyncrasies of writing that I found difficult at times. We switch back and forth between Caleb and March’s pov’s with no space or any indication of the switch. Sometimes, it led to me being slightly lost as to whose head I was in. I honesty can’t see that as a problem, though. If a moment’s confusion pulls you out of a story, then you probably weren’t that invested in it in the first place.

There is plenty of story to be invested in, for sure. Not only is there tension between March and Caleb and a huge question mark over whether their relationship is every going to get off the ground, but Caleb’s past is breathing down his neck and it’s a deadly one.

At the same time as the present-day story progresses, we have peeps back into the nightmare world Caleb inhabited from the time he was 12 years old until a few years back, and that story was running right through the middle of everything. It was a brave move and I think it paid off. It was a continual reminder of why Caleb acted in certain ways and, in some sense, how he became who he was.

I have to admit that some ways this didn’t work for me. For one thing, given not just what happened but how Caleb thought and felt at the time, I think Caleb got over it too fast and too completely.
Apart from the odd panic attack, which he deals with remarkably well, he pretty well-adjusted given his background. March has had a far harder time dealing with his relatively less traumatic experiences, although I survivor guilt is nothing to be taken lightly.

There are some big surprises at the end of the book. Some I saw coming a mile away, some I didn’t. The reader is being asked to suspend disbelief on one or two things and I was more than happy to do so, given the reward. Others might be sniffier and purist about it and for them it might go beyond the realms of the believable. That would be a shame because they’d miss seeing the sun by focussing too hard on the cloud.

I was utterly charmed by this book and its characters. Caleb and March are the most adorable couple I’ve read in a long while, partly because they are so real with all their flaws and uncertainties, but also so bright and alive in their approach to life, the universe and everything. Caleb, in particular has such a sharp, witty, even sarcastic personality that absolutely blows me away. He’s that slightly weird friend that everyone wants to sit next to at the party because he makes them laugh and always has something funny and intelligent to say. March, on the other hand, is the one holding back slightly with a proud and loving expression on his face making sure no one who might spoil his vibe gets within shouting distance.

The other flashers who are going all out to entertain you today, are