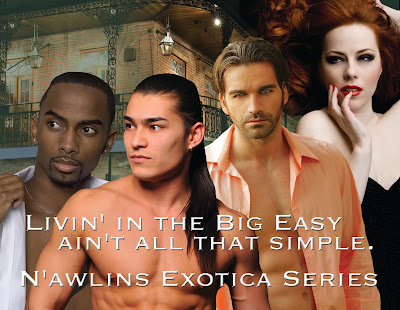 Blurb: New Orleans is supposed to be the big easy. One night changes everything for Frankie Choteau.


New Orleans. A city rich in tradition, diversity, and on the comeback trail from hurricane Katrina. Francois “Frankie” Choteau, a resident of this town, a cop with a hot temper and low tolerance for bs. Kajika Fortier, a transplant from Oklahoma came here looking for a dream and unfortunately it’s turned into a nightmare. On a hot summer night, they meet and cross paths during a very difficult situation. Despite this, the attraction between them is evident and loneliness for both men is a fate worse than death. They’d both like a chance at happiness but will the circumstances and Frankie’s uneasiness prevent their happy ever after?

Blurb: Livin’ in N’awlins ain’t all that easy…

Kajika Fortier loves his job, the attention he gets from onlookers, and Frankie Choteau. However, his new partner’s jealousy, mood swings, and over protectiveness drives Kajika to the brink but at the same time, excites him to no end.

To complicate things further, a murderer is on the loose looking for blood. All three of the killer’s victims are strippers which not only makes Frankie nervous about Kajika’s safety but leaves him questioning his love for being a homicide detective. Coupled with the stresses of cold cases as well as some fellow officers shunning him for coming out, Frankie is having second thoughts about staying in New Orleans. Despite the encouragement from Vance, Kenina, and Orrin as well as new chief Quinn Murray, Frankie is wondering if his life’s passion really is to catch the killers.

Will the new couple survive these new issues that impede their nearly perfect union? Or will the relationship fail, thus leaving Kajika alone and a target for New Orleans latest serial killer? Detective Choteau and Kajika’s commitment to one another is being tested in more ways than one and they only have one another to lean on.

Blurb: Living in the Big Easy is downright deadly especially if you’re a stripper. When another exotic dancer is found dead in her apartment, the heat mounts on Frankie and his fellow detectives to find the killer. Due to the magnitude of this unsolved mystery along with the LaBoy murders, tension runs high at Nineteen making it hard for all to breathe around the police station and sending everyone into a frenzy.

There’s no denying Frankie’s love for Kajika but in the back of his mind, hot thoughts of the mutual jerk off with Orrin Daugherty loom over his head. Though the feelings are mutual, Orrin wants nothing to do with this and pushes Frankie away. Add in to the mix his fascination with partner Vance Morain along with his severe case of blue balls and you got one hell of a predicament for these for complex and volatile men.

The men at Nineteen are burning with desire for one another and pleasure is beginning to be almost as important as business.

Will the sinful disruptions stop them from finding the killer roaming the streets of the Big Easy?

PRIZE All 5 Book of the N'awlins Series

a Rafflecopter giveaway
Posted by Nephy's World at 17:02