It was hard to choose a prompt this week. I really wanted to use this one 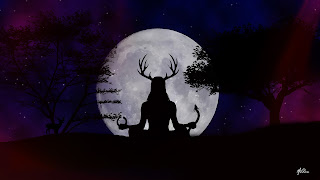 because it's just so spectacularly amazing. However, it doesn't really go with what I wanted to say and is definitely not right for my fairy. However, Cernunnos is a Celtic pagan god and both Owen and Aggie are pagan, so it tenuously fits. However, given I've only just come back I figure tenuously might not be enough so instead I chose "How many times do I have to tell you?" which fits much better.

I hope you enjoy.

“Gran, please. You’ve got to help me. Tell me what to do; how to get him to notice me.”

“Alright then, not notice. Pay attention. How do I make him pay attention to me?”

“Make him? You’d be a fine one to make the fey do anything. A better man than me, for sure.”

“Gran.” Owen ground his teeth.  His grandmother never gave a straight answer to questions like this, and she wouldn’t be pushed. Pleading and cajoling would get him nowhere. Taking a breath, he modulated his voice. “Okay, I don’t want to make him do anything, but I….”

Owen paused. Time to choose his words carefully. Any suggestion of love would be met with humiliating derision. Aggie Morton didn’t pull her punches and made no secret of the fact she thought love was nothing but a cruel illusion.

Sitting astride a wooden, kitchen chair, he watched for a while as his grandmother went about making their evening meal. He’d long ago stopped trying to persuade her to modernize her home and she still cooked over an open fire on a long, black-lead stove. At least she had electricity now and he’d made sure she had electric heaters to keep warm if she wasn’t up to chopping wood. She had a freezer, too, and a microwave, but she kept both in the shed, along with the heaters, still in their boxes.

Bending to sip from a wooden spoon bigger than his hand, out of a cauldron that might well have weighed more than his nine-year-old sister, she was positively witchy. Not that she’d admit to being a witch. She preferred “wise woman” and swore that all her potions, remedies and good advice were nothing more than “knowing the way the world works”. She was a no-nonsense person with no times for such things as magic and love. Dreams, on the other hand, she was much in favour of. When Owen had chosen to do a Creative Writing Degree rather than the Business course his father was pushing for, it was Aggie who had taken his side, insisting that words had power and learning to
wield them well could get a young man a long way in the world.

Time to draw from the well and find some words.

“I know you think the fey are dangerous and I agree with you, I really do. I’ve seen enough over the years, and learned from you to be on my guard. I won’t take anything at face value and I know all the rules about not following music or light, not eating or drinking and never going to sleep in a fairy circle. I won’t get lured into anything or fooled by glamour.”

Agatha put down her spoon and tilted Owen’s face up. He met her gaze calmly. “Hmpf. You’ve been lucky so far. I don’t see no sign of enchantment on you. But be careful. There’s more than one way to put a spell on a man, and I’ll bet that boy knows them all.”

Owen dropped his head, long strands of vibrant blue hair falling forward to curtain him. He tapped his fingers against the scrubbed wood of the kitchen table. “You know I won’t give up. I’ll figure it out somehow, with or without your help. I just want to do it right.”

“How many times do I have to tell you there is no right way to court a fairy,” Agatha snapped. “Fey and human don’t mix. Never have; never will. No relationship I’ve ever heard of has brought anything but tears in the end.”

“Yes, and I thought you’d have learned your lesson.” Agatha dunked the spoon and stirred rather more aggressively than the recipe warranted.

“What lesson? That love is bad for you?” He huffed. “I suppose it is. When it goes wrong. I just haven’t had much luck finding the right person.”

“The right person? Seems to me you’ve done your best to find the wrong ones.”

Owen shrugged. “I can’t argue with you there.”

Aggie sighed and set down the spoon again. She laid a hand on Owen’s shoulder. He glanced up. Her gaze was grave. “I thought we were going to lose you this time, boy.”

Owen shivered and nodded. “There were times where I thought so, too.”

“Haven’t you had enough to be done with love for a while?”

He closed his hand over hers and rested his cheek against her arm. She moved in to embrace him as she always did when he was hurt or sad. Her earthy scent surrounded him, wrapping him in safety and stability.

“That’s the point. It stopped being love a long time ago.”

“And you really want to be so quick to jump back in? This isn’t love either, you know.”

“A feeling eh? I know those kinds of feelings, and they rarely lead to good decisions.”

Owen twisted to gaze up at her. “Probably not, but I’ve always got you to pull me out of the lake if he tries to drown me.”

Aggie glared at him for a moment, then her rosy cheeks dimpled. “Oh, very well. I’ll help you. I never could say no to that smile. On your head be it, mind. I’ll pull your body out of the lake, but I’ll do nothing to mend your heart when he breaks it. That’s a consequence you have to work through all on your own.”

“Oh, he will. Maybe not for a very long time, but he will in the end. They always do.”