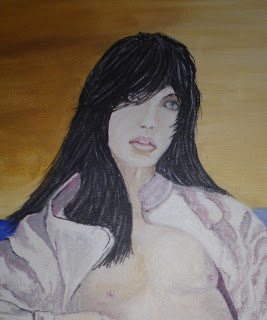 Silver was a slave. When he was less than 12 years old, he was kidnapped, tortured and 'conditioned' to be the perfect plaything. What he doesn't know about bringing pleasure isn't worth knowing, but he knows nothing about being free. Since being saved and falling in love, Silver has a lot to learn and it's hard. All he knows is how to obey. Where once he was terrified of the world and everything in it, now he's beginning to see a life beyond his front door, but it's small steps.

Writing Silver was one of the most rewarding things I have ever done. Seeing the world through eyes that can't remember ever having seen it before was so refreshing, so thought provoking. I've jotted down some of the thoughts it provoked in a series of stories about Silver's First Christmas, and I'm going to share them with you over the next two weeks. I hope you enjoy.

If you do, check out Silver's journey to get to this point in the Enigma series. 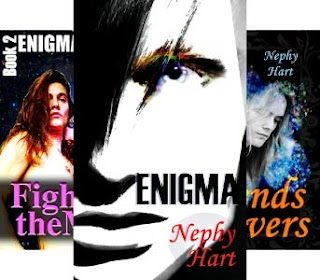 Enigma I, II and III

“Make sure you hold the ladder tightly. I want today to be magical and a trip to the hospital doesn’t fit with my plans at all.”

“Why are you going into the roof?” River smiles his secret smile, the smile he has when he’s hiding something – not in a bad way, but to give me a surprise. I like surprises, but not when River might get hurt.

“But I don’t want a surprise that hurts you.”

“Don’t worry, I’ll be fine if you just hold the ladder.”

I hold the ladder as tightly as I can, but it still wobbles a little as River balances on the very top and disappears through a hole in the ceiling. I’m very anxious. I get anxious about a lot of things. Even though River tells me I’m getting better every day, and I suppose I am, I don’t think that will ever really go away. Maybe I’m wrong. I hope so.

“Catch the boxes,” River calls from inside the hole. I’m about to tell him I can’t, because I’m holding the ladder, when I realize how silly that would be. I don’t need to hold it when River isn’t on it. “Be careful, there are some delicate things inside.”

I have to climb a little way up the ladder to reach the boxes, as River passes them down. I don’t mind. I’m not afraid of heights. It’s one of few things I’m not scared of. Sometimes it feels as if I’m scared of the world and everything in it.

There are four boxes, and when they’re all safely on the floor, River comes down out of the hole and I’m so relieved.

I help River carry the boxes downstairs and he lays them in the middle of the living room floor.

The first box is quite large, but very light. I pull open the flaps with growing excitement, and gasp aloud. The box is filled with glitter. No, not actual glitter but…things that glitter and shine. I pull one out. It’s long and soft and very shiny. “What it is?”

“The big ones can go on the ceiling, and there are thinner ones we can put over the picture frames and on the tree.”

“What tree?” There are trees in the garden, but I’m not sure they’d look good with tinsel wrapped around them.

“Silver, did you hear a word I just said?”

“Oh, no, sorry. I was thinking about the trees. How do we get the glitter to stay on? Wouldn’t the wind blow it away? It’s been strong lately, and it’s been raining a lot. We don’t wrap it around the trunk, do we? I don’t think that would look good.”

“Not those trees, silly. We’re getting a tree for inside.”

“An inside tree?” That was interesting. Sam and Hannah have plants in their house, but I’ve never seen an actual tree inside.

“You’ll see later. Maybe we’ll leave that box until then. It might confuse you. Here, open this one.”
River pushes a box toward me and I open it with trembling hands. I’m so excited. This one holds lots of little plastic things on strings with boxes at one end. Some are in the shape of flowers, other tiny lanterns and even fat snowflakes “What are these?”

“Wait a minute.” River takes one of the boxes and twists to push it into a socket on the wall. Ah, of course. That’s what the box is, a plug. I’ve never seen one quite as big as that before.

As soon as River turns on the electricity, the little plastic things turn into tiny coloured lights that spill over my hand into the box. “They’re beautiful,” I breathe. “What are they for?”

“They’re called fairy lights. We pin them up around the house and on the tree.”

“I’ve seen them before. Randy put them in the shop, but they weren’t in shapes like this. I made up some of the little house kits, too, and put them in the window. Christmas decorations.” The penny drops. “Is that what these are?”

“Oh. Oh. I know what you mean about the tree. I’ve seen them. Christmas trees. There’s a big one in the square, and Randy has one in the shop.” Randy owns the art shop where I work.

“Go ahead and take a look.”

“They go on the mantelpiece and the windowsill. I thought we could put a few in our room, too.”

“I know what I can do. I’ll bring some of the little house kits home and we can make the window pretty, just like in the shop.”

“That would be lovely.”

“I’ll go get some this afternoon and we can all do it together when Ben comes home from school. Randy has special snow. It’s in a little tube but gets much bigger when you put water on it. Snow is good at Christmas, right?”

“Snow is very good at Christmas, but do you know what’s better?”

I shake my head, although I have an idea from the way River is looking at me what he’s going to say.

“You,” he whispers, crawling across the floor until he’s close enough to kiss me.

This is the best part of Christmas; the best Christmas present I could ever have. Christmas is very new to me. I didn’t celebrate Christmas at all when I was a slave. Sometimes I saw the decorations, but I didn’t know what they were for. Of course there were stories among the slaves, but I didn’t know which to believe. It’s hard when you don’t know who to trust. They made pretty pictures in my head, though, and that’s all I had back then. Now, I have more than I could ever have hoped for. A home, a family, and best of all my soul mate, the love of my life – River, who I know I can trust beyond doubt; beyond reason. My saviour.