NEW RELEASE - HUMP IN THE NIGHT 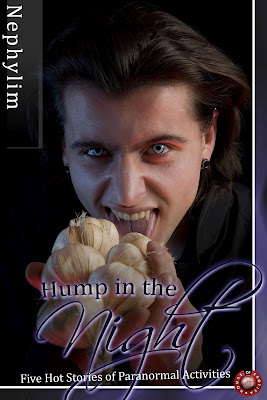 New release from House Of Erotica.

My first attempt at pure Erotica. Five short stories of Five Paranormal phenomena. All hot and steamy, far more than my usual I think you'll all agree, but I've still not mortgaged my soul for the sake of the sex. You'll still find strong stories and well rounded ( ;) ) characters.

Aster is a vampire looking for someone. When he finds Kia his plan is to fuck him and drain him, but Kia has other ideas. Recognising Aster as the man he’s been waiting for, he turns the tide and seduces him, shocking him with secrets from the past. Together, they enter into an encounter that blows their minds and changes their lives forever.

Lucien is a werewolf. He’s always known he’s different. Definitely not an Alpha like his father. More akin to the bitches than the muscular Beta’s or lithe hunters he finds himself drawn to. When the enigmatic lone wolf arrives, with his pure white hair and ice blue eyes, Lucien is lost at first glance. After a burning hot dream he finally submits to the dominant male destined to be his mate for life.

Dema and Meri’el are an unlikely coupling. In the final war against good and evil they find themselves on opposing sides. Dema the demon and Meri’el the son of the King of Angels. Drugging each other with their bodies they unleash the primal fury of their true natures and rock the foundations of the earth and the heavens.

Grey doesn’t believe in curses. When he uncovers a cavern deep under the mountain feared by the villagers as a faery tomb, he scoffs at the superstition, until he meets a stranger who lures him into the wood. A steamy encounter in a forest glade has him wondering if being cursed is such a bad thing after all.

Shay is mourning the death of his soul mate, tormented by the fact he’d never told him how much he loved him. A knife in the back in a dark alley steals his chance to finally prove his commitment, until ghostly whisper in the same alley leads to a night of passion and the second chance both men crave, to finally find peace.

The book can be purchased from....

Go give it a look. A very different experience for me and, I'll bet, for you too.

Give me feedback guys
Posted by Nephy's World at 16:50