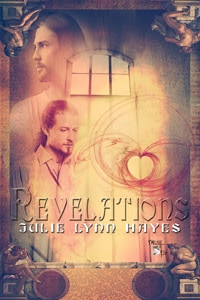 On 8th February 2013 a new book hits the world. Revelations by Julie Lynn Hayes explores the ages old relationship between Judas Iscariot and Jesus Christ in a way you'd never have imagined. Subject to a wager between God and his old friend Lucifer we hold our breaths as we wonder if this is the time in the endless cycle of reincarnation when Jesus gets the balls to accept change and to give himself up to the love of a man rather than the love of God and all men. Personally, I hope so. It's about bloody time Jesus gets a bit of fun right?

I'm very lucky to be joined today by the person who's documented this fascinating story and one of the main characters.  This series of interviews began with a chat with Jesus and Judas over at Lorrie's Flowers and Thorns when they all popped in for tea with their delightful host. The festivities carried on at Decadent Delights where M A Church hosted the dynamic duo

Today it's my turn and I get to interview a third member of the cast. Who, you might ask? Who else? May I, without further ado introduce Miss Hayes and today's guest Lucifer himself.

Last night’s concert was fun, although there was this tension… a lot of it.

But today’s another today, and I’ve gone to visit my friend, Nephylim, in far-off Wales. Ah, the miracle of modern travel! And I’ve brought someone with me, for our next interview. Yes, my agreeing to do this was as much a bribe as anything. Hopefully to prevent him from intruding on any more of Judas and Jesus’ interviews. We’ll see about that, I guess.

I introduce Lucifer to Nephy and we all get cozy in her den.

“Charming home you have,” he compliments her, producing a smile.

“Would you like something to drink?” Nephy offers, but Lucifer is ahead of her. With a grand flourish—so typical of the man—he produces three flutes glasses filled with something effervescent. We each take a glass.

“Nice crystal,” Nephy comments with a wink for Lucifer. “What shall we drink to?”

“To the success of Revelations.” They both turn toward me. I admit, I’m surprised by his choice. I wonder what he wants. And then it hits me. Of course.

“You don’t have to suck up. I’m working on your story. Focus on Revelations first, okay?”

He is a very good-looking man, I admit it. Beautiful platinum hair that falls down to his waist, maybe his ass. Am I really looking at Lucifer like that? Well, maybe… Okay, I am, so shot me. His eyes are a very cold blue, almost glacial. And yet, if you look really closely, you can see flames inside. Not literally. I just mean there’s a warmth in there, that doesn’t quite match the exterior. It’s hard to explain.

(I have to admit I'm giving him the once over too. Who knew Lucifer has such a nice ass. Wow he can wriggle those hips. And those eyes are to die for...well yeah, of course ;) )

“So tell us, what part do you play in this?” I return the subject to where it should be.

“I assume by this you aren’t referring to the here and now but Revelations?”

Wow, he knows how to be annoying sometimes. I try not to roll my eyes, and simply nod.

“I am the balance in the universe, don’t you know?”

He smirks. “It’s not quite so simple as that. Read Paradise Lost and you’ll see what I mean.”

“Are you saying that you and God are not on opposite sides?”

“Certainly not. We’re both necessary in the scheme of things. He would never get rid of me any more than I’d choose to get rid of him.”

“You were the catalyst, weren’t you?”

“For what happens in Revelations? Yes, I can take that credit. Those two should really thank me for that. Not that I expect that to happen. Well, not from Judas, anyway. Jesus is much nicer, but then is that really surprising?”

Most people would agree with his assessment, I think, but I try to keep an open mind.

“You made a wager with God, didn’t you? About Judas and Jesus?”

He looks rather pleased with himself, I think.

“What sort of a wager?” Nephy asks.

“I simply bet God that nothing would change between them, that they would keep their two thousand year old status quo going on.”

“By them, do you mean Jesus and Judas?”

“I do indeed. Very perceptive of you.” He leans toward her, and I cough. Not quite where I intended this to go.

“Try to focus, please, and not on my friend?”

He laughs, drains the champagne in his glass and tosses it—it disappears in mid air. I mumble something under my breath about parlor tricks.

‘Thank you for a charming visit, but I have things to do.” And as soon as the words have left his mouth, he’s gone.

Jeez, but he can be a handful.

“Well, then, let’s go out to the pub and see what’s shaking?”

Sounds good to me. See you all later. You’re free to join us, of course.

And there you have it. An interview with one of the most eligible, and unavailable, batchelors in the universe. Be sure to catch the man himself in his spotlight dance...

Judas has never been very popular, not in any incarnation that he and Jesus and the others have lived through. But he doesn't care about that. All he cares about is following the instructions of God as set forth in the script that they follow. And Jesus. For Judas has secretly loved the son of God for over two thousand years.


But now he decides that enough is enough, and he's tired of watching Jesus die far too early, and for what? This time Judas is determined to see that Jesus lives a long and happy life, no matter what price he has to pay to accomplish it...no matter if he has to make a deal with the devil himself.

Revelations is a story of what could be, told by those who play it out, time after time after time, unbeknownst to the rest of mankind. They've come back again, for yet another round. But this time is going to be different.
Excerpt:

It's not always easy to sit on the sidelines and watch what is happening, to resist the urge to intervene in his best interest. My son's that is. Jesus. But I do so, because I know it's for his own good. As well as for the good of mankind. I can't let my concerns as his father override my vested interest in the fate of man. But sometimes that is easier said than done.


This morning I am not alone. Someone else is with me, someone with his own agenda, although we are not as diametrically opposed as some would imagine us to be. Good and evil aren't the simplistic concepts some would portray them as being—there are more grey areas there than you might think. And rightly so.


He smirks. Too much for my taste, I have to admit, but sometimes he does have his moments, and he too has a part to play in what is happening in the world of men. Someone needs to fill the role of the villain, after all.


The stage is being set for the third act, the scripts have been handed round, and the actors are taking their places. Will this time end any differently than the others? That depends on my son, on Jesus. I'm thinking this will be the time when he'll make the change.


"He'll change nothing," Lucifer interjects, although I've asked him nothing, certainly not inquired as to his opinion.


I glance at him. He's dressed to within an inch of his life, and wears the most ridiculous sunglasses I've ever seen. I decide not to comment on his fashion sense. "I think he might, this time. I think he's ready for change."


Lucifer snorts. "It's been two thousand years, and neither one has exactly caught on yet. Why should this time be any different?"


"Care to put your money where your mouth is?"


He eyes me carefully. "I would, but you see you have this whole mystic omnipotent God thing going on. Personally, I don't care for those odds."


I arch an eyebrow. "I may be omnipotent, but Jesus does have free will and he does possess the ability to make his own decisions. You think I'd stack the deck in my son's favor? Just to win a bet with you?"


"Let's say I'm taking no chances." He smiles. "Tell you what, though—give me free rein. Let me do what I want, and you not say anything or do anything to interfere with me? As far as they're concerned, that is."


I open my mouth to object, he hastily interjects. "No killing, I swear to it."


That's better. I still have some measure of control over the serpent.


"So be it." I agree, turning my attention back to where it had been, to my son. I'm smirking now. Openly.


O ye of little faith, watch and learn.
Author Bio:
Julie Lynn Hayes was reading at the age of two and writing by the age of nine and always wanted to be a writer when she grew up. Two marriages, five children, and more than forty years later, that is still her dream. She blames her younger daughters for introducing her to yaoi and the world of M/M love, a world which has captured her imagination and her heart and fueled her writing in ways she'd never dreamed of before. She especially loves stories of two men finding true love and happiness in one another's arms and is a great believer in the happily ever after. She lives in St. Louis with her daughter Sarah and two cats, loves books and movies, and hopes to be a world traveler some day. While working a temporary day job, she continues to write her books and stories and reviews, which she posts in various places on the internet. Her family thinks she is a bit off, but she doesn't mind. Marching to the beat of one's own drummer is a good thing, after all. Her published works can be found at Dreamspinner Press, and MuseitUp Publishing, and she has also begun to self-publish at various places on the Internet.

Muse It Up Publishing