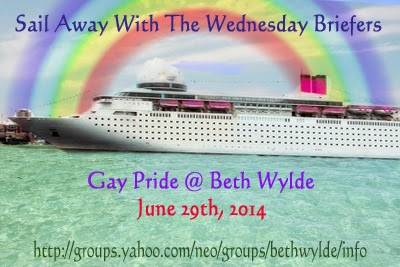 The day has finally arrived! The Beth Wylde Event begins very soon, so head off over to Beth Wylde Yahoo Group to meet the flashers, ask questions, read snippets of information, engage in conversation and win prizes. Many of the authors are giving away copies of their books, and we are giving away three $25 Amazon gift cards

Don't forget you need to join the group before you can join in the fun - so go ahead. Do it now. Can't wait to see you there.

Many of us have written themed flashes based on the same gay cruise. Here is mine.

Bow was entranced. The perpetual chatter that had irritated Thorne and Cammy in the car had been replaced by awed silence. It was simply too much for him to process.

“There are so many windows,” he whispered, at last. “It’s so shiny. And there are pink lights.”

“It is beautiful, isn’t it?” Cammy breathed, gazing up at the cruise ship. Thorne smiled indulgently at his two boyfriends. They were so different in many ways, and so similar in others.

“You’ve changed your tune,” Thorne said. “I thought it was way too big and scary for you.”

Bow tilted his head and gazed up at Thorne through his indecently long lashes. “I’ve been thinking about it,” he said, “and I have some ideas for how you can reassure me when I get scared.”

“Y-you have?” Thorne swallowed, wondering if he’d got the wrong idea. That look had been… hot.

“Mhm.” Bow rubbed his cheek against Thorne’s leg. “The boat’s quite small, really. I’ll probably be able to walk most of the time. We can stroll on the deck thingy in the moonlight, and Cammy can help. And if it gets too hard, you can carry me back to our…. What’s it called, Cammy?”

“Cabin. Carry on. I like where this is going.”

“You can carry me back to our cabin, and we can… do all kinds of things we’ve never done before.”

“I thought you weren’t ready to do those things.” Thorne’s heart thudded in his chest, just thinking about… things.

“It wasn’t that I didn’t want to. I was too young. You know that. I wasn’t allowed. I’m grown up now. Well, almost—and Luke isn’t here.” Bow tucked his rainbow-coloured hair behind his ear and fluttered his eyelashes.

Bow giggled. “That’s just what I’m going to be—a monster in the sack.”

“What did you say?” Cammy gasped, his eyes wide.

Bow reached for Cammy’s hand. “I know you’ve wanted to do it for a long time, and I’ve been a prune. But I talked to Star, and we agreed this would be a good time to bite our cherries.”
Cammy choked, and put his hand over his mouth. “It’s prude, Bow, not prune, and I think the words you’re looking for are ‘pop our cherries’.”

“Don’t be silly, cherries don’t pop. Do they, Thorne?”

“What?” Thorne had been staring at Bow, but only heard half of what he’d said. “Bow… did you say you’ve been talking to Star about sex?”

“Why not? He’s my brother. I’m not going to talk to Dad about it. I hardly know him.”

“Who are you, and what have you done with our precious Rainbow?” Cammy asked, stifling a giggle.

“Whatever. I’m not that anymore.”

“How fast can we get to the cabin?” Cammy asked. “Let me take the chair, I’m faster than Thorne.”

“Whoa there.” A man standing at the top of the ramp stopped them. “You need a run-up on that side, but it’s a different story going down. Do you want a hand with that?”

Cammy growled at him. “I may be small, but I’m strong. I can manage.”

The man grinned at them. “I’m not suggesting you’re not strong, but I’ve seen enough chairs go over to know that no matter how strong you are, gangplanks are not easy to negotiate. I know all the lumps and bumps that cause trouble.”

The man, whose name they discovered was Mark, chatted cheerfully as he helped them manoeuvre Bow’s chair down the ramp and all the way to the cabin. They were surprised to find their luggage had arrived before them and had been unpacked and neatly stored.

“Wow, I wasn’t expecting that.”

“Nothing but the best for our star guests,” Mark said, cheerfully.

“I’m not a star,” Bow said, “Thorne is. Oh and Star, of course, and Orbit and…Well, all of Cosmic Explosion. That’s a band, you know. Star’s band. He’s my brother.”

“You won’t really get into trouble, will you?” Bow asked anxiously. “Not for being kind to us?”

“No, I won’t get into trouble, I promise. There’s a brochure on the table, and an interactive programme on the television, telling you what’s going, for the whole of your stay. Once you’re settled, you might like to take a swim in the Poseidon Pool, or relax in the spa. They’re just the thing after a long journey.”

“Ooh, that sounds nice. Maybe later. I’m going to be… um… eating cherries with Cammy and Thorne for a while.”

Cammy choked, and Thorne turned away so the steward wouldn’t see the blush on his face. Appearing slightly confused, Mark left with a cheerful farewell and promise to see them again later.

As soon as the door closed, Bow got to his feet and sidled up to Cammy. He was much stronger on his feet now, over a year after the shooting.  He still limped, but rarely needed the chair, except when chronic fatigue literally swept the legs from under him. It made him seem frail, even though that was far from the truth.
Everyone hoped he’d improve quickly in the relaxed atmosphere on the ship.

Cammy slipped his arm around Bow’s waist. “What does the most beautiful boyfriend in the whole world want to do now?” he asked in a husky voice.

Thorne put his arms around Bow from behind. “Yes, do tell, beautiful boyfriend.”

Bow gave a wicked grin and showed them.
Posted by Nephy's World at 11:39