Nighttime Promises by M A Church 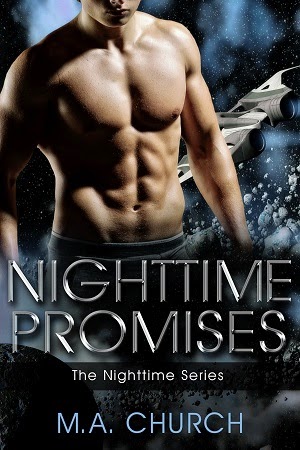 ~I’m running a giveaway at my blog too. It runs until July 18th! http://machurch00.blogspot.com

Be careful what you wish for...

The first time Daroshi spotted Bryan, the Maz’Rarian warrior knew he wanted the small town sheriff as his mate. Things have been going downhill since. Daroshi doesn’t have experience dealing with humans, especially a very unhappy human male who’s just had his well-planned life jerked out from under him. Little does Daroshi know the changes Bryan will insist be made to help him adjust. But he also never dreamed someone would actually try to kill his mate.

The shocks just keep coming for Sheriff Bryan Coltrane. Finding out aliens exist was bad enough. Finding himself mated to one was definitely not on his to-do list. Wait, what? Did someone say tentacles? And if that’s not enough, a killer tried to poison him. Added to his misery, now he’s on his way to another planet—a planet that he hates on sight. How’s he supposed to survive in such a cold, ugly industrialized world? Can you take the country out of the boy without killing his spirit?

As Bryan struggles to adapt, a killer plots to end his new life... before it even begins.

Daroshi watched Bryan leave the room, and then sighed. He dressed, then crossed over to the screen and called up Bryan’s measurements from the ship’s mainframe. Replicating clothes didn’t take long. There weren’t many choices in color. As he duplicated Bryan’s clothes, he thought back over the last few hours. The meeting with the Council went exactly as he thought it would, but that didn’t mean he liked it. Bryan didn’t seem too upset at the outcome, though. He was learning his human was more levelheaded than he gave him credit for. Maybe it was because he was a police officer back on Earth.

What really worried him was Bryan’s reaction to the planet he’d now call home. Bryan had been very careful to hide his feelings, and even more careful in what he said. But Daroshi knew his human well enough to know Bryan wasn’t happy. And wasn’t that an understatement? Bryan hated it all.

Granted, Earth was a beautiful planet with its endless blue skies, lovely green grass, and deep oceans. Earth contained so much variety and color, and his planet did not. He could see why Bryan was shocked, but this was his home, and now it was Bryan’s home. Would he ever be happy?

Would he be as satisfied as he was on Earth? Daroshi knew Bryan considered himself a ‘country boy,’ whatever that actually meant. Daroshi thought it might have to do with Bryan enjoying the outdoors and being unafraid to get out there and get dirty in Earth’s lush soil.

Changing his home around to fit Bryan wasn’t a problem. He wanted Bryan to be happy. If that helped Bryan adjust, then Daroshi was more than content to let him. But Daroshi couldn’t alter his planet.

He heard Bryan approach and carefully blanked his face. “Clothes are there on the bed. Are you
hungry?”

“Yeah, actually I am.” Bryan quickly dressed in the black pants and drab shirt laid out on the bed.

“Do you have human food on the menu here?”

“I downloaded the things I saved on the starship’s mainframe, along with your clothing size, so there will be something you like. We might want to add to the menu though.”

M.A. Church lives in the southern United States and spent many years in the elementary education sector. She is married to her high school sweetheart and they have two children. Her hobbies are gardening, walking, attending flea markets, watching professional football, racing, and spending time with her family on the lake.

But her most beloved hobby is reading. From an early age, she can remember hunting for books at the library. Later nonhuman and science fiction genres captured her attention and drew her into the worlds the authors had created. But always at the back of her mind was the thought that one day, when the kids were older and she had more time, she would write a book.