Finding Love by Various Authors for The Trevor Project 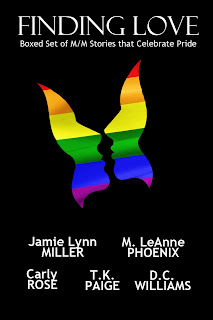 The authors banded together with the goal of raising funds for The Trevor Project and the proceeds are being donated to help support their efforts to provide life-saving and life-affirming services to LGBTQ youth.

His Fragile Heart by Jamie Lynn Miller
Do you believe in the power of love, even after death? After losing his lover in a car accident two years ago, actor Nathan Marshall wasn't interested in another relationship. Until he meets waiter Justin Kowalski. Something about him seems so familiar that Nathan is instantly drawn to the younger man. Surprised at his capacity to love again, his relationship with Justin blossoms. But then an unbelievable truth is revealed - one that could break both their hearts for good.

Through New Eyes by T.K. Paige
Roommates Jed and Doyle have been best friends since meeting in college. Now that they've graduated and are starting new jobs they have no intentions of letting that change anything. Doyle is everything Jed isn't, smart, cute and active at the LGTB center. Jed has always looked out for his friend and been there for him. They have plans and an amazing relationship, everything planned out to the smallest degree. Any changes could make it all go off the rails. So why can't Jed get over how annoying he finds Doyle's ex turned friend, who seems to be around way too often? Why can't he stop noticing Doyle in new ways? If Jed doesn't take a risk, he could miss what's been there all along.

Iridescent (An Angels All Fire Series Short) by M. LeAnne Phoenix
Best friends, trusted confidants, partners in crime— call it what you like, Phai and Jen have been two halves of a whole ever since they met just over five years ago. The trouble is, that while Phai is falling more in love with his best friend every day, Jensen Whitfield seems content to call him brother. Hephaistion Amyntoros has faced many challenges during his long, long life, but the idea of confessing his heart’s desire to Jen and discovering that he doesn’t feel the same, terrifies him... but what happens if he does share his feelings? When the whole of Phai's past rages into blistering life, ready to consume the very sun, Phai must focus on getting them out alive. Will they emerge from the fire intact or will the love in his life burn like a supernova once more?

Unexpectedly Lucky (The Bradford Boys, Book 1) by Carly Rose
Lincoln and Ryan have been best friends since the fifth grade. Their friendship has always been effortless, but a single night of passion threatens to change everything. Will the emotional fallout drive them apart or will they be lucky enough to find love unexpectedly?

What the Heart Wants by D.C. Williams
Will has just graduated from high school and is struggling with coming out. A surreptitious visit to NYC Pride brings Kev into his life. Will is immediately attracted to Kev, but they're separated by a huge age difference, and Will is still coming to terms with himself. Their friendship grows over the course of a year, but can it become more?

Stopping abruptly, Link grabbed Ryan’s arm, turning him about so they were standing face to face. He looked up at his best friend, and as their eyes met, he knew, deep down in his bones, that he would always be there for Ryan, no matter what.

“That’s okay, isn’t it?” Ryan asked. “You’re not worried that I’m secretly crushing on my straight best friend or that I’m going to start coming on to you, are you?” His eyes shifted towards the ground as he waited for Link’s answer, his shoulders tensing as he furrowed his brow.

“Never, man. Never. We’re brothers, to the end.” Link reached out and pulled Ryan in for a hug. Ryan’s arms wrapped around his back and he buried his face in Link’s hair, holding on so tightly that, for half a heartbeat, their two bodies became one. Stepping back, Ryan ran shaky fingers through his hair and a half smile cautiously lifted the corner of his mouth. “You’re not my type anyway. No self-respecting guy would be caught dead crushing on you, not with those spindly little legs and spider-monkey arms,” Ryan teased. His expression turned into an all-out grin as Link laughed out loud.

Lunging towards Ryan, Link jumped onto his back, wrapping his legs around Ryan’s waist. “Since I’m so pathetically puny you won’t mind carrying me back to the car.”

Ryan pinched at Link’s legs through the denim of his jeans and spun in a tight circle until Link was forced to loosen his grip and drop to the ground. “In your dreams, string bean,” Ryan chortled before breaking into a run. “Last one to the car buys coffee!”

Moving quickly, Link pushed himself up off the ground and took off in hot pursuit. “You just wish you could get your hands on someone half as hot as me!” 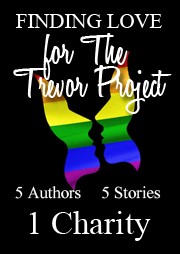 About The Trevor Project

The life-saving, life-affirming work of The Trevor Project springs from the powerful intersection of storytelling on stage and film.

In 1994, producers Randy Stone and Peggy Rajski saw writer/performer James Lecesne bring to life Trevor, a character he created as part of his award-winning one-man show WORD OF MOUTH.  Convinced Trevor's story would make a wonderful short film, Stone and Rajski invited Lecesne to adapt it into a screenplay.  Rajski directed the movie and TREVOR went on to win many prestigious awards including the Academy Award® for Best Live Action Short Film.
The Oscar-winning film eventually launched a national movement. When producer Randy Stone secured an airing on HBO with Ellen DeGeneres hosting, director/producer Peggy Rajski discovered there was no real place for young people like Trevor to turn when facing challenges similar to his. She quickly recruited mental health experts and figured out how to build the infrastructure necessary for a nationwide 24-hour crisis line, and writer James Lecesne secured the funds to start it. On the night their funny and moving coming-of-age story premiered on HBO in 1998, these visionary filmmakers launched the Trevor Lifeline, the first national crisis intervention and suicide prevention lifeline for lesbian, gay, bisexual, transgender and questioning youth.

Since then, hundreds of thousands of young people in crisis have reached out to The Trevor Project’s multiple in-person and online life-saving, life-affirming resources--Trevor Lifeline, TrevorChat, TrevorSpace and Trevor Education Workshops.

The Trevor Project is the premier organization providing crisis intervention and suicide prevention services to LGBTQ teens and young adults.

Jamie Lynn Miller has been writing fiction since childhood and decided to take the plunge and go pro in 2008, finding to her amazement that people truly enjoyed her love stories. She’s a romantic at heart, and her tales reflect the desire we all have to find “the one,” persevering through trials and heartache for that happy ending.

Jamie has a degree in fine arts and has spent the last twenty years working as a graphic designer, though she’d much rather be writing. She was born in Chicago and still lives there today with her husband and their two furry, four-footed children, er… cats.

If she’s not brainstorming story ideas, you can find Jamie at a sci-fi convention, in front of a furnace doing glass blowing, or on a mat twisted into a yoga pose.
Website - Facebook

T.K. Paige picked up her first book to read around the age of four and hasn't stopped since. She discovered the M/M genre in August of 2012 and an addict was hooked.

If you see her and she is not reading, then she is thinking about the books that live in her head. It doesn't matter what else she is doing, it is guaranteed half her brain has a plot running through it.
A stay at home mom for more years than she would like to think about, she is lucky enough to be married to a wonderful guy who encouraged her to write throughout their years together.

Then when she finally did it and she told him what she was writing, he turned only slightly green and asked “Do I have to read it?” Apparently, he had dreams of her being the next Urban Fantasy sensation with her taste in movies.
Website - Facebook - Tumblr

M. LeAnne Phoenix would tell you that the worst time of her life was the two years that she attempted to take off from writing. If you asked her to explain exactly why she did such a thing, you would most likely get the mad attempt to arch an eyebrow like her dad and then a shake of the head as she told you it was unlucky to speak of such things. Suffice it to say, it will never happen again!

Born and raised in Fort Worth, Texas in the mid-1970's, Ms. Phoenix was young and wild (and even free!) during the crazy wondrous decade known as the 1980's and the even crazier but now grungy decade of the 1990's. Music is second only to the muses that live and breathe to fill her mind with beautiful men, and music always helps them to tell their stories. She is never without her iPod or her computer no matter where she goes, although, she does like to hike and take pictures of the sky and the moon, and even the occasional shot of the sun through the branches of a tree.

An avid cat lover, Ms. Phoenix has been owned by many throughout her life, though her current owner is one Lily-Rose, who really would like for her to step away from the keyboard and pay her some attention! After all, hasn't she earned it?
Website - Facebook - Twitter

Carly Rose was named after her grandmother, an accomplished poet, and a character her mom met in a romance novel while awaiting her birth, I guess you could say that writing has always been in her blood.

As a child her parents used to threaten to take away her books and make her play outside when she wasn't getting her chores done. Now she’s all grown up and her roles as wife, mother of two, and part-time nurse keep her hopping. As a blogger, book reviewer, freelance editor, and author, she still manage to spend time each day with her nose in a book.

She’s a student of life who’s always looking for new opportunities to learn and discovered early on that the love of family, friends and a positive attitude are all you really need. A free spirited motorcycle enthusiast who loves butterflies, dancing in the rain, and believes that everything is better in purple, she love to hear from reader so stop by and say "hi" anytime!
Website - Facebook - Twitter - Book Review Blog

a Rafflecopter giveaway
Posted by Nephy's World at 07:19