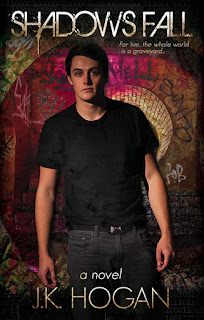 A gift—or curse—gives Titus McGinty the unwanted ability to talk to ghosts. When he starts seeing the same few apparitions repeatedly, appearing with similar gruesome injuries, he begins to wonder what they want from him.

Detective Charlie Hale has a serial killer on his hands. On the loose for weeks, the Queen City Slayer has left the police nothing to go on, no forensic evidence other than what he wants found. The city is running out of time.

The crisis brings Titus and Charlie together—Titus stumbles upon a body and finds himself a suspect. Their budding romance is tested as they are sucked into a web of underground laboratories, restive spirits, and religious fanaticism. They’ll have to work together to find the identity of the killer before he takes his next victim…Titus.

J.K. Hogan has been telling stories for as long as she can remember, beginning with writing cast lists and storylines for her toys growing up. When she finally decided to put pen to paper, magic happened. She is greatly inspired by all kinds of music and often creates a “soundtrack” for her stories as she writes them. J.K. is hoping to one day have a little something for everyone, so she’s branched out from m/f paranormal romance and added m/m contemporary romance. Who knows what’s next?

J.K. resides in North Carolina, where she was born and raised. A true southern girl at heart, she lives in the country with her husband and young son, a cat, and two champion agility dogs. If she isn’t on the agility field, J.K. can often be found chasing waterfalls in the mountains with her husband, or down in front at a blues concert. In addition to writing, she enjoys training and competing in dog sports, spending time with her large southern family, camping, boating and, of course, reading! For more information, please visitwww.jkhogan.com.


Let’s start by telling us, in twenty words, or less, what you’re book’s about.

It’s about a man who can see ghosts and a detective who’s pursuing a serial killer, and how their lives converge.

What was it that led you to write in the genre(s) you write?

In general, I write what I read. In the beginning of my writing career, I wrote m/f paranormal romance because that’s what I was reading a lot of. When I started reading more m/m, stories would pop into my head so I moved on to write in that genre. Shadows Fall is new for me because it’s more of a suspense/thriller, although there’s a romance thread in there. I pretty much just follow my interests.

Are your books character led or plot led, or both?

Definitely both. It depends on the initial idea that comes to me. My first m/m, I Survived Seattle, was definitely plot based, but with Shadows Fall, I started hearing the main character, Titus’s voice in my head long before I figured out what would happen to him.

What is your favourite part of the writing process?

Gosh, there are so many ups and downs…the obvious answer would be release day. I love putting that final product out there. But the best feeling is writing a really great scene, one that you know is great no matter how hard you usually are on yourself.

What is your least favourite part of the writing process

Editing, of course. It’s a necessary evil, and I admire my editors because it is a tough job. I’m pretty sensitive, even though intellectually I know the importance of editing, so there’s still that little sting when someone says anything negative about my baby, even when I know they’re right.

Where do you get your inspiration for your characters?

It could be anything; usually it’s a little flash of something. I’ll hear a name or see someone who’d make a good character, or sometimes they completely materialize out of nothingness in my mind. Those are the ones I like best.

Tell us a little about the characters in your book and their story. You can use more than twenty words this time.

In Shadows Fall, Titus is from an American gypsy camp (they do exist, and not the kind that you see on those horrible reality shows), but he’s been shunned due to his ‘lifestyle.’ So he settles down and starts his own business, a coffee shop, at a very young age. His matrilineal bloodline is shamanistic and he inherits the ability to see and talk to spirits.

Titus crosses paths with a detective named Charlie who is pursuing a notorious serial killer. The two have an instant connection but things become complicated when Titus realizes the ghosts he’s been seeing are victims of the killer. Suspicions, chaos, and danger ensue. Can you guess who the killer is?

If you could have one wish what would it be?

Well, if I was a beauty pageant contestant, I’d have to say world peace, right? But I’m not that magnanimous. I’d just wish that my family and I were safe, happy, and secure for the rest of our lives.

Being in a tornado. I’ve never even been close to one (they’re not that common in NC), but for some reason they’ve always terrified me.

If I came to dinner what would you feed me?

You’d want something good, right? So I’d probably take you out for a boatful of sushi.

Which of your characters would you like to be sharing the dinner table with us?

Definitely Titus. He could tell us about all the spooky ghosts we’re surrounded by.

Tell us in the character’s own words, what he/she would have to say about you.

Titus: Meh, she’s not too bad. She just sort of watches us and writes things down. A little cooky, but who isn’t.

What would they say (again in their own words) about themselves, and their story that will make us want to read about it?

Titus: All I ever wanted to do was be left alone. Seriously. But even when I’m alone, I’m not alone. I also have a knack for getting into trouble, so there’s that. Plus, Charlie, the cop, he’s super hot. That’s reason enough to read about us.

Which other fictional character(s) would you like to be present at the dinner party?

LOL, you said fictional, not necessarily literary, right? In that case, I’d have to say all of the Avengers. Yeah, I’m that kind of nerd.

What other authors would you say have either influenced your writing or you would like to emulate?

I read so much, and I like so many different authors, it’s impossible to pin down particulars. The only one I could say for sure is Nora Roberts, because when I first decided to try writing, over a decade ago, I was devouring her stuff. That sweet romance genre isn’t quite my bag anymore, but I was definitely influenced by her in the beginning. Now, I’ve been trying to read more outside my genre, a lot of horror and thrillers—Michael Crichton has always been a favorite, Neil Gaiman, Nick Cutter, Dean Koontz. My interests are constantly changing.

Which character from literature, would you most like to have invented?

Sherlock Holmes, simply for the fact that mysteries of that calibre are so complex and intricate, and I wonder if I’d ever be able to pull off something like that. Plus, he’s one of the most recognizable figures in literature.

What do you prefer writing. A one off novel, a series or short stories?

Series for sure. I get too attached to my characters, so I want to see them again.

What kind of books do you read (if you have time to read)?

Where do you see yourself personally and professionally in 5 years time?

Personally, not much will change. I want to be living where I am with my husband, my kids, and my pets. Professionally, I hope I have one heck of a backlist by then. Of course, I want to be going strong with the writing, but I’d also like to be doing more cover design.

Do you have any other projects in the offing we should look out for?

I’ve got Unbreak Broken, the third book in the Coming About series, going into editing, gearing up for a September release. For those of you who’ve been waiting for Rory’s story, this is it!

My current WIP is something very different for me. It will end with a romance, but it mainly follows two men who end up in a behavioral health center for very different reasons. It’s very cerebral and dense to write, so I have to take lots of breaks. J

In between working on that, I’ve been drawing an m/m webcomic (a paranormal shifter story) called Icarus Rising, which can be found here: http://icarusrising.smackjeeves.com/ I’m not sure how far I’m going to go with it, but it’s a fun hobby for times when I’m too tired to do anything else!

19-Jun
Mikky's World of Books
Elisa - My Reviews and Ramblings

25-Jun
Up All Night, Read All Day
Full Moon Dreaming

a Rafflecopter giveaway
Posted by Nephy's World at 09:19