My fairytale trilogy is a very new project. The first book is currently being edited, and I have no date, as yet, for release. I'm three-quarters of the way through the third book and the fourth is brewing. I thought I might share a few snippets here and there to whet your appetite for an entirely new and experimental fairytale.

As a brief background...
Tay is a sixteen-year-old boy who had his life turned upside down when a fairy called Willow turned up and told him he was a fairy prince and had to go back with him to save the fae world from demons. Cale is Tay's best friend who was possessed by a demon, and buzzers are...well, to everyone else in Faerie buzzers are annoyances, like clouds of flies who live only to annoy. They are brushed aside and barely tolerated. They are not considered to be people at all. 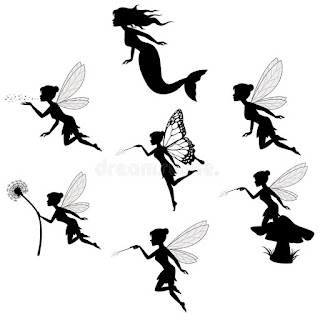 Tay’s voice rose until, in the end he was shouting in Cale’s face.
Cale looked shocked. He opened his mouth to say something, then
gasped. A little group of buzzers were hovering around his face. He tried to wave them away, but Tay stopped him.

“Wait. See what they’re going to do.”

Closing his eyes, Cale scrunched up his face as the buzzers cautiously approached, then hovered close.

“What are they doing?” Tay asked.

More and more buzzers swarmed toward Cale landing on his head and shoulders. Cale squirmed. “Some of them are kissing me. I’m sure. On the cheek.”

“Oh my God. They’re comforting you. They know you’re hurting and they’re trying to comfort you.”

“Some of them are singing in my ear now.” Cale smiled and closed his eyes.

“Singing? What are they singing?”

Tay leaned on the parapet with one elbow while he watched Cale with the buzzers. He was smiling softly, his eyes closed and his lips parted. He seemed a lot more relaxed than Tay had seen him since it all kicked off.

One of the buzzers landed on Tay’s hand, where it rested on the bridge. Startled, he jumped and the buzzer flew up, but settled again straight away. Tay leaned down to bring his face close to the buzzer. It was a woman, less than two inches high, with beautiful, pale blue iridescent wings, more like butterfly wings than dragonfly wings. Long golden hair fell loose over a flowing blue dress and there was a tiny garland of flowers around her head like a crown.

“You’re beautiful. I don’t believe you’re nothing more than a pest
and I don’t understand why everyone treats you like you are.

You’re really trying to help my friend, aren’t you?”

The buzzer nodded enthusiastically and it startled Tay. He hadn’t been an expecting an answer.

“Do you understand me? What I’m saying?”

Again the little creature nodded and Tay was delighted.

“Your friends are really trying to help Cale?” Enthusiastic nodding.

“Aren’t you afraid of the demon?” The buzzer tossed her head in a silent snort, then shook her head. “Thank you. He’s feeling very alone.” Tay looked up to find Cale absorbed in watching the buzzers, with a bright smile on his face. The buzzers seemed to be playing with him, teasing, pulling his hair and flying away, or rubbing themselves against his cheek in a comforting manner.

The buzzer flew up and hovered in front of Tay’s eyes, almost standing on the tip of his nose. He drew back his head when his eyes crossed, but the buzzer followed, so he stopped and let it flutter in front of his face. He didn’t know what he was expecting but it certainly wasn’t to be blasted between the eyes by what felt like a bolt of lightning. With a cry, he stumbled backwards and landed on his bottom.

A flash of white appeared in the corner of his fizzing vision and the buzzers rose in an angry cloud as Willow appeared, waving his arms and threatening dire vengeance.

“Are you alright?” Tay blinked and found Willow crouching beside him.

“You were talking to a buzzer?”

A groan drew Tay’s attention to Cale, who was flat on his back. He pushed Willow aside to crawl to his friend.

Cale seemed totally dazed as he blinked up at Tay. “Aw,” he said in a small, trembling voice. “What did they do to me?”

“Pretty much the same as they did to me, I think,” Tay said, allowing Willow to help him up, then holding out his hand to Cale.

“I don’t understand,” Willow said. “As far as I’m aware, buzzers have never done anything like that before.”

“I don’t think she meant to hurt me.”

“They what do you think she meant? To telepathically converse?”

Tay opened his mouth to answer before he realized Willow was being sarcastic.

“We’re sorry.” Tay jumped and looked over his shoulder.

“That voice. It startled me. Where did it come from?”

“The one that said ‘sorry’,” Cale said. “Where do you think it came from?” He pointed to a spot above Tay’s head. When Tay looked up he saw the tiny woman he’d been talking to.

“Did you hear that?” Tay asked.

“I heard nothing,” Willow said.

“That must be what they did to us, blasted the ability to understand their language into our heads. Can you do it to Willow, too?” Tay asked the little fairy.

“Well, Cale isn’t your Lord either and he’s not been particularly nice. Not that he’s been nasty either,” he added hastily at Cale’s indignant glare.

“He is Lord’s friend and he is hurting bad. We want to help him; help Lord.”

“That makes sense, I guess, but Willow is my friend, too. He’s my protector.”

“Is he worthy? Does he have a gentle heart?”

“I don’t know that his heart is very gentle; he’s a deadly killer. Can
killers have gentle hearts? But he is lonely. People are afraid of him so he doesn’t have many friends. It would be nice for him to be
friends with you.”

“Oh no. Spare me. Please.” Willow rolled his eyes, but a tiny smile tugged the corners of his mouth and he stood still as the buzzers swarmed. They patted his face and pulled his hair and then, when he didn’t slap at them, they zapped him. Willow didn’t fall as Tay and Cale had, but he did reel against the parapet and shook his head to clear it, looking as dazed as they had been at first. The buzzers flew up in a cloud, giggling.

“He is sworn to protect you?”

“Until we return to…um….” Tay struggled to remember the name Willow had used, “the Queen.”

“Yes, that’s it. He’ll protect us until we’re safely…um…home.” He had a lot of difficulty saying that word. As if anywhere he’d never even been could be home. Still, he’d probably better start getting used to it. It’s not as if he had much choice and it wasn’t going to do anyone any good if he pissed of his…the Queen and princesses.

He guessed they could make his life a misery.

“You are going on another journey. You seek help for your friend.”

“Are we permitted to use it?”

“Of course you are,” Cale said. “In fact, it will be a relief that someone does. Most people seem to want to call me ‘demon kin’, as if that’s all I am.”

“We don’t fear demons. They cannot hurt us.”

“That’s true,” Willow said, in a thoughtful voice. “I’ve never heard of a buzzer being possessed.”

Waves of relief washed over Tay. At least that would be one huge thing to cross off his list of worries.

“We know how, but we cannot teach you how.”

“I don’t understand. Why can’t you teach me?”

Tay ground his teeth. He forced himself not to show his irritation.

Tay deflated. “I can’t do that yet, can I?” he asked Willow who shook his head.

“Not until you’re eighteen.”

“You told me that already, didn’t you? That I’ll be immune from
possession when I’m eighteen and can use my powers.”

“It is Aria. I am leader of the ethen of the forest.”

“Ethen? Is that what you call yourselves? Not buzzers?”