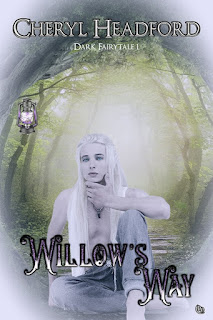 This Friday (30th October) sees the release of the first of a brand new Young Adult fantasy trilogy, Willow's Way introduces us to sixteen-year-old Taylor Preston. Right in the middle of his GCSE examinations, he's looking forward to a summer of friends and family, Then, his parents take in a new foster son and his world goes to hell.

Willow doesn't speak and is downright weird. Tay has no idea just how weird until, one day, he speaks and Tay's world crumbles.

Lost in a new world, where the one he thought he knew is turned on its head, Tay must fight to save his best friend, Cale, who is possessed by a demon and a target for everyone with a knife or a sword in their hands. Even Willow who is supposed to be Tay's protector would kill Cale if he had the chance. Tay will not allow it and stubbornly holds out hope, against all the odds, that the mysterious Enchantress will have a way to save Cale before his time runs out and the demon takes him over entirely.

From the heart of the Welsh Valleys to The Kingdom in the heart of Faerie, Tay comes to face with the strangest things, some of which are scary, some delightful, and some that might well kill him before he even has a chance to meet his real mother.

With Willow at his side, he must brave the worst that Faerie has to throw at him and take a journey that no Welsh schoolboy has ever dreamed of. Tay's lost, and his only chance is to follow Willow's Way.

In this first book of the series, LGBT themes are discussed in a general way. In later books, this will be taken further and gay relationships will develop. However, as a Young Adult book, all physical contact will be appropriate according to Tay's age.

Keep watching for more information and a spooky gievaway on Friday.