I'm totally cheating this week. None of the prompts really fit into where I am with the story. I'm posting this one 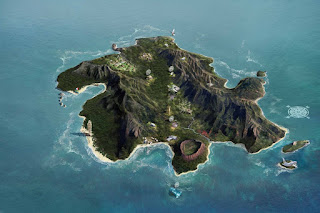 on the tenuous basis that it's similar to the island Bran comes from, which we don't know about yet, but will.

The smell of bacon greeted them as they descended the stairs. The usual sounds of Aggie making breakfast soothed Owen. They were comfortingly family and just what Owen needed. It wasn’t that he regretted what he’d done, at least not at that moment, but it was a heck of an adjustment and he hadn’t quite made it yet. He needed grounding and Aggie was just the person for the job. She glanced up as they entered the kitchen.

“You need to go shopping,” she said shortly, then turned to poke at the bacon and sausages that hissed and spat in her big, cast iron pan.

“Sure. We’ll take a walk down to town after breakfast. What do you need?” Owen poured himself a coffee from the already boiled kettle.

“Not me. Your husband. He needs clothes.”

Owen glanced at Bran, who was sniffing at the coffee jar with his nose wrinkled. He was wearing Owen’s jumper and a pair of jeans that were too big. They didn’t look right on him.

“Do you want a cup of coffee?” he asked, distracted by how cute Bran looked.

“I don’t think so.” He put the tin down and brushed of his hands. “I’ve never tried, but it doesn’t smell very nice.”

“Have a sip of mine.” Owen held out his mug, and Bran eyes it suspiciously.

“Don’t you have any hot drinks at home?”

“Just water? Not juice or pop.”

“Pop? You have drinks that go pop? I’d like to try that.” His eyes lit up with interest. “Are they like bubbles.”

Owen went to the fridge and selected a can of Coke. Aggie wasn’t keen on having it in the house, but Owen liked it so she kept a few cans in the back of the fridge for him. She hid them behind as many things as she could as a discouragement, but he always found them and made sure he replaced them before he left.

Bran jumped a little at the hiss when the can was opened, and he eyed it with deep suspicion.

“Be careful,” Owen said as he handed over the can. “Don’t drink too fast or you’ll get hiccups.”

“Are the bubbles in there?”

“Oh yes, there are plenty of bubbles in there.”

Bran took a sip, and his eyes widened. Then he took another and grinned at Owen. “They pop and fizz in my mouth.” He took a few more mouthfuls, then put the can on the table. “I like the fizzing but it’s too sweet.”

“There are other things you can try. We don’t have any, but if we’re going to town later we can get some.”

“Better you stick to water than put any of those things in your body,” Aggie said sniffing, as she put a plate of large, sausage and bacon sandwiches in front of them. “Full of chemicals. Unnatural.”

Bran nodded sagely. “Yes, I was told about the chemicals. Poisons like they put in the water. Why do
you drink poison?”

Bran gazed at Owen, who was frankly stumped. “It’s not really poison,” he said and Aggie snorted.

“Well it’s not. Not really, but I’m not going to fight with you about that right now. If you want healthy bubbles we can get some carbonated water. It’s just water, but fizzy like the pop.”

Bran brightened. “I’d like that.” He nibbled delicately at his sandwich, sending Owen flirty glances over the top. Aggie sat down with them and tucked in to her sandwich far more heartily. Owen fell somewhere in between, feeling like one of the three bears.

They fell into a companionable silence as they munched, which was broken by a rap on the door. Grumbling, Aggie got to her feet and answered it. Not much surprised Aggie, but her face was shocked as she stepped back and allowed their visitors to enter. Owen gaped in surprise as two of the guards Owen had met the night before struggled through the door, hauling a heavy-looking, ornate chest between them. They laid it carefully on the floor, then bowed courteously and left without a word.

“The dowry,” Bran exclaimed, bouncing like a child at Christmas. “Of course, this isn’t all of it. We get more after five years.”

Kneeling, Bran ran his fingers over the chest, which was about the size of two large suitcases stacked one on to of the other, releasing secret latches. The lid sprung open as did Owen’s mouth. His brain refused to process what he saw.

Aggie turned her back on him and addressed Bran. “The world’s changed since your folk last walked freely. Men don’t take payment in gold and gems anymore, at least not for what you want to buy. You’ll need a specialist to turn this into something you can spend. It’s all numbers on a screen these days.” She didn’t sound impressed at all. Clearly a chest brimming full of bright gold coins and glittering gems had no affected her in the way it had Owen. That one chest must contain more wealth that he had seen in his lifetime.
“
How…how much is in there?”

Bran shrugged. “In your world, I don’t know. Hopefully, it’s enough to make a home.” He seemed anxious, thrown by Owen’s reaction.

Aggie snorted. “That’ll see you right for the rest of your lives, no question, but I’ll see you take your time deciding what to do with it. That much money can turn a man’s head and I’ll not have you reckless with a gift like this.”

“For us,” Bran said firmly. “To make a place for ourselves in this world. Are you sure it’s enough?”

Aggie snorted again. “You’ll learn boy. For now, finish your breakfast and I’ll lend you enough for shopping until I get this lot sorted out.”