Jaydon can’t afford to lose a bet he’s made, so when the sweet as sin Eluin offers him The Contract, it may be exactly what he needs. Or is it? Things get a little twisted with the cheeky demon being around. The number of demons in Jaydon’s apartment grows, with Eluin’s big brother Eluel and his wayward lover Sam showing up. The couple is at a breaking point in their own on/off relationship and this time getting back together seems as probable as hell freezing over.

It all started with an espresso machine, even though I’d seen him drinking espresso only once in all the time we knew each other. Then he complained for three days that he hadn’t tasted such swill in his whole life. The fact that I’d made it for him with all my love didn’t cause him to show an ounce of tact. I felt in my gut it was a tremendous mistake to enter the mall, but even if I’d tried to avoid it, I doubt he would’ve taken my opinion into account. He would’ve thrown a temper tantrum of magnificent proportions, which wasn’t a pretty sight. I’d been a witness and a victim of such antics once, only it was in front of a restaurant, which I hadn’t dared come close to ever since. The glowing look in his eyes while we passed by the shop windows made my heart sink, because I couldn’t afford most of the things he stared at, especially with the plans we had for the rest of the week. My lovely boyfriend possessed a seductive appearance and a good heart, but his perceptions were terribly distorted due to eighteen years of systematic spoiling at the hands of his parents. He used to reassure me this wasn’t going to come between us since he was madly in love with me, but he couldn’t be further from the truth. After the ironic remarks I had been subjected to in the past few weeks, I knew I wasn’t going to get away with it. I didn’t want to lose him, but it was clear that if I didn’t overcome my financial issues, his love for me would vanish into thin air together with his rebellious spirit, and he’d settle with any of the “appropriate partners” his parents tried to match him with. Once, one of his father’s business tycoon friends with his three hot lovers landed in front of my door and pounced on me, obviously not familiar with the appearance of his intended chosen one. I led a fierce battle using all means possible, which ended up being the shoehorn lying next to the shoes at the front door, in order to preserve my honor. Things deteriorated when Lyte came out of the bathroom in his short, sexy bathrobe to check why I was wreaking such havoc. We had to barricade the door and listen to a serenade for more than an hour before the police came to take them away. I turned to Lyte with a smile, intending to remind him of that time the tycoon came calling, but when I caught his hand, he didn’t react at all. He had already seen it. He gazed at the window with an oblivious smile, and then raised his finger and pointed at it. A second later he issued a brief statement with a determination I’d rarely heard in the voice of another human being. “I want it!”

Hey, nice to meet you!

I’m Eluin, a third level demon *jumps elegantly off a table*.  Why a third level you might ask? Well, I flunked a subject or two at the demon prep courses because it was so much more interesting to cut classes and run off to do tricks. Not big ones, mind you. Stealing socks from people’s laundry so that one of a pair is left or filling up mint candy with wasabi were my favorites. Also, instead of making mischief between people I kind of preferred to make them get naughty with each other if you know what I mean.

Long story short, I ended up third level, which implies I still have some apprenticeship to do and I don’t have an iPad *sniffles* so I must carry all this paper around but… Never mind. Let’s not complain.

Am I’m a strong sexy demon? Mhmmm. Check this out: 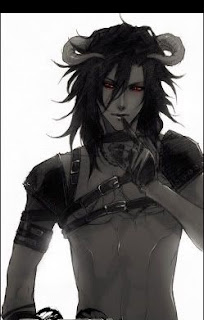 Just kidding! LOL! That’s Sam, my brother’s on/ off sweetheart.
This is me: 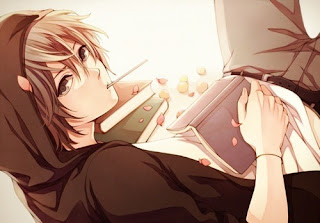 I change my eye and hair colors a lot but that’s how Jaydon likes me the most. Who’s Jaydon? Oh, he was just a guy whose soul I was supposed to harvest but sometimes things don’t turn exactly the way you planned…

If you want to know our story and see what happened and have some fun with Jaydon, my brother and Sam, be my guest. We have coffee and cinnamon cookies.

Rian Durant is a writer roaming the MM fiction sphere but doesn’t like being confined by (sub)genres and categories. The only rule she believes in when it comes to life, love and writing is to do everything with passion or not at all. Links: Facebook https://www.facebook.com/riandurantauthor/ Twitter: https://twitter.com/rian_durant Instagram: https://www.instagram.com/rian_durant/ Blog: https://riandurant.wordpress.com/ Goodreads: https://www.goodreads.com/author/show/14370031.Rian_Durant
Posted by Nephy's World at 09:00