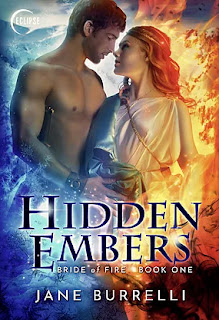 What happens when the forbidden is fated?

Can an exiled princess rise from the ashes?

Would the flames destroy me or forge me stronger than ever...

After all, fire and ice don’t mix. Or do they?

When the gods breathed life into us, they blessed us with an element. It's a pity they didn’t care to bless anything else.

The Empress of the Throne of Flames is assassinated. Acting as a decoy to protect the next Empress, the undervalued Princess Nymira flees to the north. She must now carry the sacred sword, the symbol of her people and rejoin the Empress.

It is a mission Mira cannot fail but first, she must traverse the Western wastelands. The journey is perilous and the once sheltered princess finds herself rescued by the Ice Lord, Zorren. The leader of the Iceari, the natural enemy to Firelanders.

Zorren is reputed to be a ruthless leader and Mira fights the attraction that blazes between them. Resulting in a clash of not only their wills but also their elements. After all, fire and ice don’t mix. Or do they?

This is book one of the new Bride of Fire series. Join the journey to a mystical world and the adventure and romance that awaits.

Publisher’s Note: This fantasy romance is intended for adults only and contains elements of danger, suspense, mystery, adventure, and sensual scenes set in an apocalyptic world.

Blue eyes twinkling, the Icer set the kindling on the ground and offered me his free hand as he straightened. I took it, grimacing as my side protested at the stretch. Worry furrowed his brow. “Are you hurt?” “No.” I tried to snatch my hand back, but he held on, turning me slightly. His heavy hand connected with my rump and I yelped as he dusted the snow off my backside with a little more vigor than strictly required. “Hey!” He grinned unrepentantly, and with a final, and in my opinion, wholly unnecessary swat that had me leaping forward he released me. “That is a taster if you ever feel the need to leave camp again on your own without telling anyone.” Stooping, he gathered the kindling while I stood there vigorously rubbing the injured spot and gaping like a fish. It felt like his handprint had been branded onto my buttock. “Y… you’re… you’re not serious?” I spluttered. That blond eyebrow rose a bit more.
“Very. Is this how the slaver’s caught you unawares before?” My face heated and I found something fascinating on the ground wishing it would swallow me whole. “I thought so.”

When I realised that the world was not hiring for a ‘sarcastic but benign Supreme Ruler of the Universe’ I’ve decided to focus on my passion. By day I work in a UK company’s finance department and by night I become my alter ego Scribble Girl or as my good friends have affectionately dubbed me the 'sex author'. Always armed with a notepad and pen in the black hole I call a handbag, I have been writing never-ending stories since the age of 11 and this all stemmed from my love of reading.

I’m part of the Harry Potter generation and while waiting between books would literally devour any book I could get my hands on. Let’s put it this way J.K Rowling has a lot to answer for. I adore that there is no end in sight to where your own imagination can take you and that between the pages of a book you are transported to another world.