This week I have a prompt to play with that fit in perfectly with this week's installment, and for balance I found a picture of a male faery also 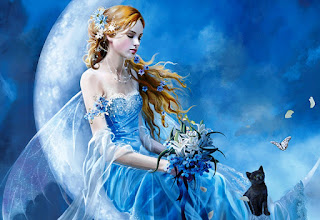 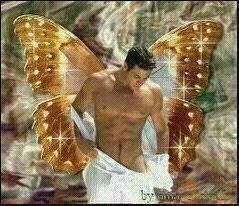 At the stroke of midnight, Owen was pacing the banks of the lake. He checked his watch for the hundredth time to find time crawling so slowly it might have been going backwards. The light of the phone was harsh in darkness lit only by an occasional glimmer of a pale moon, as it dodged between clouds. He’d almost broken his neck a half-dozen times on the path over the mountain. He’d almost turned back a dozen more, but here he was, phone in hand, watching the numbers march onward to his doom.
He was so intent on the bright screen that he almost missed the change in the quality of the light around him. Glancing up, he was surprised to find that the entire lake was filled with a faint blue light. Even the mist on the surface was blue. Somewhere, far away, bells were tinkling and right on the edge of hearing someone was singing.
The sound of singing grew louder as the light in the water brightened. Owen took a step backward as something like a flock of birds burst out of the water and rose into the air making strange chirruping sounds. They circled overhead, dipping and swirling, silvery in the light of the moon that had now cleared the clouds and glittered in a clear sky. Squinting his eyes, Owen gasped as he realized the swirling shapes weren’t birds at all, but tiny people, clothed in blue and emitting a slight blue glow, a pale shadow of the light from the lake.
As the singing came closer yet, Owen saw figures moving in the water, swimming up toward the surface. He swallowed hard when a group of young men, naked to the waist, with long hair and shimmering wings broke the surface and fanned out on either side of Owen, their feet up to the ankles in the water. Owen swallowed even harder when he noticed the long, bright swords each bore at their hip. Each man wore a silver torc and a twisted band around their upper arms. They stood erect and proud, facing toward the water.
Next came a group of female fairies, dressed in flowing robes encrusted with crystals that looked like water droplets, and masses of flowers woven into their hair and held in sprays in their hands. They, too fanned out along the edge of the lake in front of the men, their feet and lower legs still in the water.
The third group to emerge were clearly the most important. As they neared the surface, the maidens strew flour petals on the water. Unlike the others they did not simply emerge as a human might, walking on the bed of the lake, they rose out of the water to stand on its surface, and moved slowly toward the bank.
The group was led by a tall man, dressed in a similar manner to the rest of the male fairies, except that he wore a tall silver crown that glittered with crystals. There was no doubt that this was the king. Walking beside him was a woman, just at tall and just as regal, wearing a trailing robe of blue and white. Her crown might not be as tall as the king’s but judging by hear bearing she was in no way subservient.
Behind the royal couple were about five or six faeries, both male and female. Owen couldn’t see Bran, but he might well have been one of them. It was from them the song came, although Owen could still not clearly distinguish the words. It came to him all at once that they were not singing in English or any language he had heard before. Although there were words they were fluid and silvery, more like flutes and bells than voices.
Unlike those who had come before, the king and queen stepped out of the water and glided toward him. Although their feet were bare they walked over the sharp stones as if on a red carpet. Owen fought the urge to turn and run as the royal court drew closer.
The king and queen stopped little more than arm’s length away and the singing stopped abruptly. In the silence that followed every sound was magnified at both king and queen gazed intently at Owen. He squirmed under the scrutiny, unsure of what was expected of him. He did his best to stand tall and meet the fey gazes, but it was hard. If it hadn’t been for Aggie’s advice to make like a statue and act like an equal he would have curled in a ball or run.
“They see weakness as clearly as you see colour,” Aggie had said. “They will be looking for it. You can’t hide your fear but you can show you are fighting it. They won’t expect you to be fearless but they will respect your courage.”
At that moment, Owen didn’t feel very courageous. He had no idea what to do or say, or what was coming. That was the worst. The tension amped by the moment until Owen wanted to scream, “just get on with it would you?”
As he was about to reach breaking point, the king and queen stepped aside and Bran stepped forward from behind them.


Unlike the other men, he was not bear chested but wearing a loose tunic over trousers. They fabric was pearlescent white, girdled with a silver belt patterned with leaf designs. The same designs decorate a silver band the circled his head, holding back his hair. His face was decorated with delicate silver designs of seemingly random swirls and spirals, sweeping up to his eyes, which were ringed by silver and black eyeliner. He was stunning and Owen forgot how to breathe.

The other flashers playing this week are